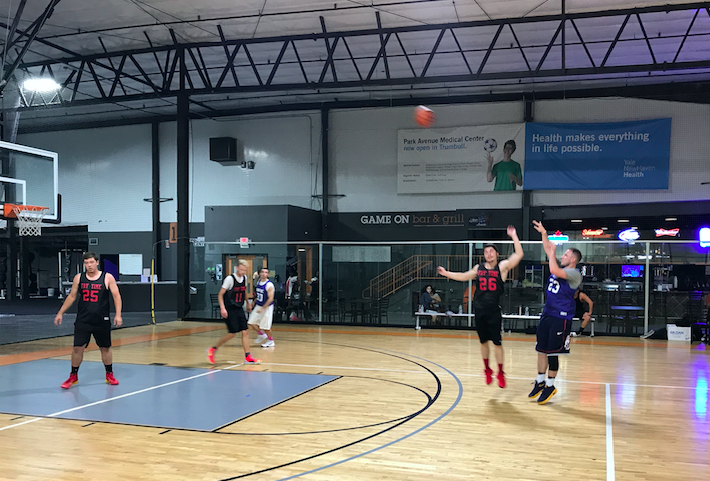 Run TMC looked very relaxed in their first playoff game of the season on Thursday night, crushing Fry Time by a final score of 127-78. The win advanced Run TMC to the the second round, making them the only team in Legacy League’s history to win at-least one playoff game in each of the first four Legacy Leagues seasons. For Fry Time, the loss meant an official end to their season without a win.

Run TMC has struggled to find balance in their offense at times during the season, but on Thursday night they had their depth on full display. Finishing the game with five players in double digits (three with 20 or more points), it was a true team effort en route to a big win.

Run TMC pulled three-pointers nearly all game, shooting 18-of-49 (36%) from deep. Against a larger team like Fry Time, you can clearly tell Run TMC made it a strategy to stretch the floor by attacking from beyond the perimeter. While the efficiency could have been better, Run TMC still executed well enough to earn the win. Fry Time competed with Run TMC in the first half, but eventually ran out of gas against a much stronger opponent.

“We started off slow,” Run TMC’s Matt Zocco said. “But then we realized it was getting close, and we had to turn it up a level.”

Turn it up a level they did, going on outscore Fry Time 72-34 in the second half.

Zocco was a key factor for Run TMC’s offense on Thursday night, finishing the night with 17 points on 3-of-4 shooting from outside. Functioning as a floor-spreader for his team, Zocco made it much easier for his fellow teammates to attack the paint. Will Hudson was one of the main beneficiary down low, scoring 27 points to go along with 17 rebounds.

Run TMC will go on to face Team Moose in the second round of the playoffs. A rematch from earlier in the season, Team Moose prevailed in the first matchup between these two. Still, Run TMC has a very realistic shot at upsetting the defensive powerhouse that is Team Moose, but they will need to utilize all of their players like they did on Thursday night.

“We know they like to take out your best guy, so if we attack with balanced scoring, it should be hard for them,” a confident Matt Zocco said