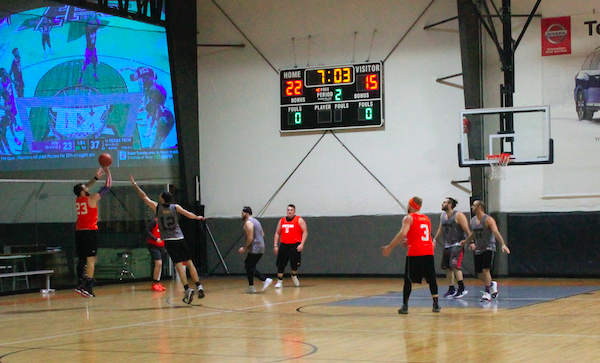 A game that many believed to be the best game of the night between Sportslook and NickStrong turned out to be one of the biggest snoozers of the season. Sportslook, coming off of their bye-week, looked very rusty early in this game. As a team, shots couldn’t seem to drop, even the uncontested ones. While both teams were short on manpower, the rust was apparent early in the game.

Sportslook’s Bryan Acevedo was the one offensive bright spot for both teams tonight as he dropped 26 points on 11-of-18 shooting, as well as seven rebounds, two steals, and a block, leading them to victory, 70-61.

Sportslook had a nice 4th quarter scoring 25 points and Dan Kokkoros credited it to their ability to move without the basketball.

“We had cutters wide open, getting easy buckets,” Kokkoros said. “A lot of dunks in the second half really helped us breakout of that funk.”

For NickStrong, only two players ended the night in double figures with Ryan Florentine dropping 20 points with 10 boards and Nick Durso adding 13 on 5-of-6 shooting.

Another glaring storyline in this one was the foul totals for both teams. 31 total fouls led to a very choppy game that couldn’t find a distinct flow to it.

“We need to improve on that cardio, get the high temp offense back,” Kokkoros said. “Slowing ourselves down helped, but 4th quarter, [we need to be] getting that gas back and pulling away from teams.”