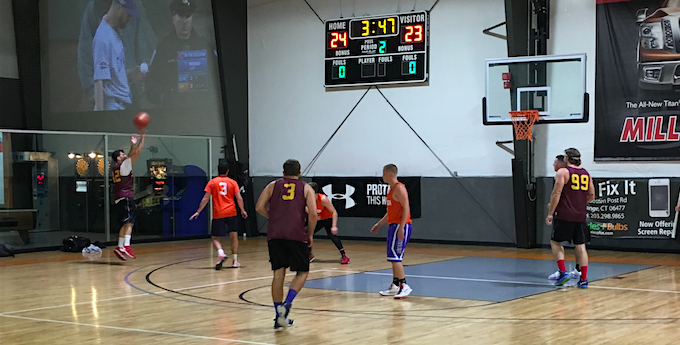 The fatigue was setting in for the four-man Sportslook roster that were behind by five with minutes left in the fourth quarter. Scotty Crochard, the player of the night from both sides of the court, hit a critical three-point shot from behind the arc to make it a one-point game with under a minute left.

Yet, it was not enough to beat a grinding Goon Squad team, who won 53-50 in unexpected fashion over the previously undefeated Sportslook squad.

It came down to the late game fouling, and Goon Squad capitalized by hitting just enough free throws when it mattered most. Foul after foul, Sportslook kept bringing Goon Squad players to the line for an opportunity to seal the deal and make it a four-point game with less than 10 seconds left.

A pivotal part to the Goon Squad victory was the early ejection of Nick Bacarella for Sportslook, which happened in the first couple of minutes, and only left his team with four available players. Without subs during a 4-on-4 full court forty minute game, the fatigue set in quickly. It was noticeable that Sportlooks needed to utilize their timeouts efficiently in order to keep their only four players rested in the remaining three quarters.

“They had five guys to start the game, then four guys the rest of the game, so we tried to run as much as we could to use our size and physicality to tire their team out,” Goon Squads Matt Marconi said. “It was a little sloppy down the end, but thank god we were able to make our free-throw shots.”

The Sportslook sensation, Bryan Acevedo, was cold as ice, scoring a season low seven points on 2-of-10 shooting from the floor, and 0-for-7 from behind the arc. Without Acevedo shooting like he typically does, Crochard was able to keep his team close until the end by knocking down five of the seven 3-pointers he took, and ended with a season-high 24 points.

“It definitely killed us considering we only had five to start but if we control the tempo in the second half we will be alright,” Crochard said about Bacarella’s ejection at halftime.

Sportslook does not have much time reflect on this somewhat surprising loss, as they have to get ready to take on a Blood, Sweat and Beers team coming off a thrilling win over the Cereal Killers.