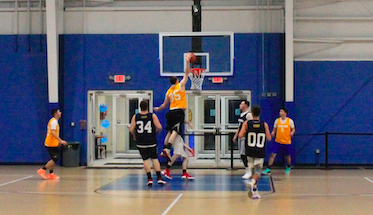 Neither team shot 50.0 percent from the field, and the game featured 27 turnovers in 40 minutes of play, but after all the ruckus it was the Skyhookers coming out victorious over the Werewolves, 67-61.

The Gino Forte/Brian Heston combination seemed off tonight for the Werewolves, connecting on 18 of their 48 combined attempts from the field. While Forte still led all scorers with 26 points and had a great second half, the Werewolves couldn’t work their inside game tonight as well as they would have liked. The obstacle? Chase Almond.

Almond had 15 points and 10 rebounds tonight, but what was most impressive was his shot defense. He finished the game with six blocked shots, and entered the game with seven of them on the season. Along with his effort, Brendan O’Donnell scored 16 points and pulled down 11 boards while dishing out a game-high 7 assists.

The Skyhookers used a balance attack, as everyone who played found themselves in the scoring column tonight. They built a nice lead during the first half, going up 34-22. Zach Ward finished with 13 points, while Zach Almond and Zach Charette each had eight points. After allowing just 10 and 12 points in the first two quarters respectively, the Skyhookers were outscored in the second half, however played just enough defense to never relinquish the lead.

“I think we got disrespected a little by the league,” Almond said. “No one wants to talk about us, rank us low, but come playoff time, physicality and defense is what wins it.”

If their goal was to play a physical, defensive game, I’d give them an A+. The Skyhookers improved to 3-2 on the season, while the Werewolves failed to snap their losing skid, dropping their fourth consecutive game since the opener. Next week, they face the Boston Blazers, currently on a three-game winning streak, while the Skyhookers match up with the reigning champs in Lob City.