And-1 made it interesting, but unable to snatch first win vs The Land 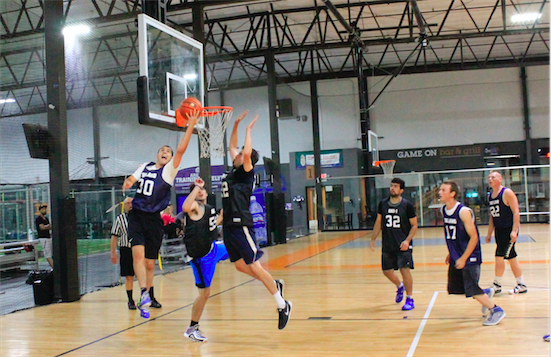 After coming off of their first win, The Land jumped out to a great start in week five, but edged out a close one as they watched And-1 crawl their way back, 71-62.

For the second week in a row, Brett Cody led The Land with 27 points, while Aaron Smith led the way for And-1 with 22 points.

The first half ended 38-26 in favor of The Land. And-1 needed to fight their way back into the game and leave their first half mistakes in the past.

“We have to finish at the rim, we’re struggling right now, missing layups and all that stuff and we have to slow them [The Land] down on the fast breaks,” And-1’s T.J. Booker said.

Smith put on a great display heading into the second half, trying to show that it was his game to take over and propel And-1 to their first win of the season. The game was within reach, as And-1 had lowered the deficit to within 10 points, but it just was not enough to stop The Land.

All five players for The Land ended up in double figures, including Pete Gage, who would finish with a double-double: 12 points and 14 rebounds. Andrew Och also scored his season-high 12 points while shooting 50 percent from the floor, and Alec Ward was good for 10 points, four rebounds and four assists.

The Land took their second straight win behind a well-rounded team performance. They will have a tough matchup next week against Wake and Blake, who are coming off of a loss to ZewCrew. The Land could see success if they can repeat the distribution that they saw this week, and the return of Mike Cody would not hurt either.

As for And-1, Smith was the leader, but Jake Miko and Santiago Mateo followed behind him. Miko had 15 points on 6-of-20 from the field, and Mateo contributed a double-double with 12 points and 13 rebounds.

These standout performances from And-1 were enough to keep them in the game until the end, but they will need more production out of the rest of the supporting cast if they hope to snatch their first win next week against Sportslook.

And-1 will need to step up their game on the defensive end to shut down Bryan Acevedo, who has been on a tear since joining Sportslook, and will have even more trouble if we see Andrew Cavanagh back in the lineup. The trio of Smith, Miko and Mateo will need to carry this week’s play into week six for this team to have any chance at victory.