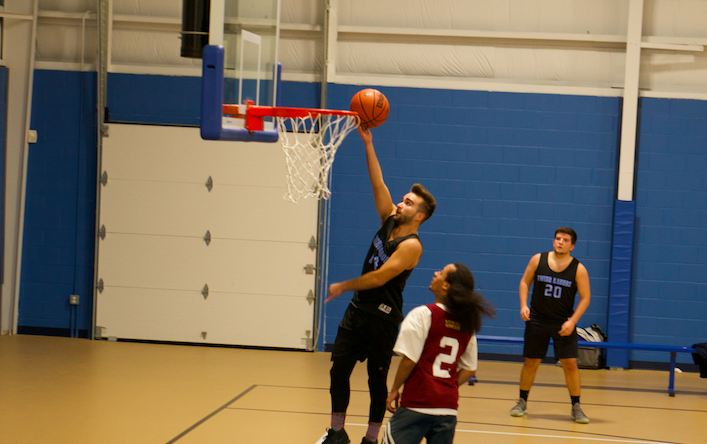 After having an impressive Summer 2018 season, the Swish Kabobs got back to their wining ways in their first game of the season on Wednesday night. It was a close game the entire way, but the Swish Kabobs ended up defeating the Boston Blazers, 67-61.

The Swish Kabobs had five players score in double-digits and they had the ball moving all game with 14 assists as a team. Tyler Barbosa led the team with 15 points included three huge three-pointers.

Greg Bell stuffed the stat sheet with 11 points, six rebounds, five assists, and four steals. It was a clear team effort by the Swish Kabobs wining just about every aspect of the game

“My teammates were spreading the floor well,” Barbosa said after the game. “I was just able to get a few open looks because they were driving the ball hard and kicking it out.”

The Boston Blazers played a good game and shot the ball well from the three-point line shooting 42 percent from deep. Corey Strickland led the way for the Boston Blazers with 16 points. Another notable stat line was James Mitchell who had an impressive double-double with 11 points and 10 rebounds.

The Swish Kabobs were moving the ball smoothly, crashing the offensive glass, and stealing the ball with consistency.

As a new team in the league, the Boston Blazers still have a lot of potential. The season is still young so an 0-2 start is nothing to get too worried about.

Next week the Boston Blazers (0-2) will try to get their first win of the season in a very winnable game against the Alaskan Bull Worms (1-1), and the Swish Kabobs (1-0) will try to stay undefeated as they take on the Werewolves (1-1).

Barbosa knows with so many new players on his team, they still have a lot of work to do.

“We were testing different lineups to see who worked well with who,” Tyler Barbosa said. “We will continue to do that for the rest of the season (to see what works).