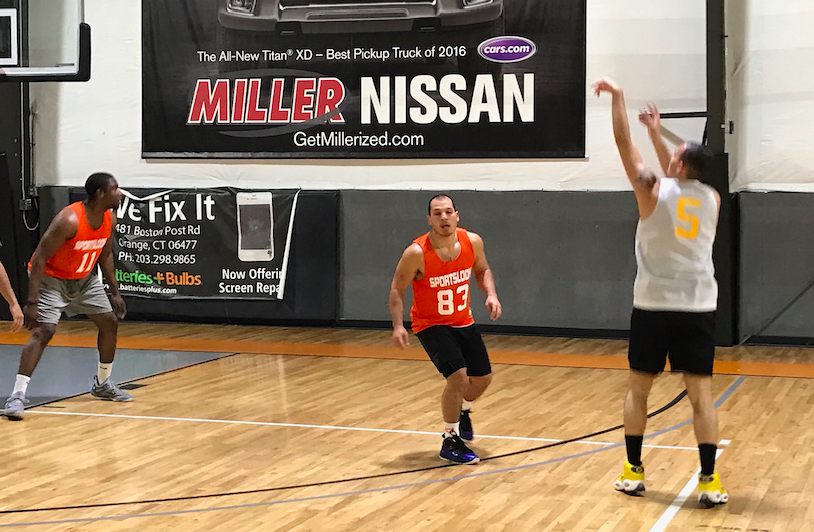 The rematch of last season’s championship did not disappoint, with a twenty-point halftime lead dwindling to single digits in the final minutes, before the Brotherhood pulled away in the closing moments. The Brotherhood captured the 11-point victory, 80-69, in the Tuesday night thriller.

Sportslook’s vigorous comeback starting in the third quarter was sparked by point guard Scott Corchard. He went 6-for-11 from three on his way to 26 points.

Bryan Acevedo was the only other player to score in double-digits for Sportslook with 16 points, but he struggled to find his rhythm going just 6-for-21 from the field. Sportslook “looks” to shut down Carmine Santorelli’s Temptations next week in an anticipated matchup of top tier teams.

The Brotherhood continue to have balanced scoring, with four of their players scoring in double-digits on the night. They were lead by reigning-MVP Michael Davis’ 19 points on 8-for-14 shooting.

Tim Adanti continues to be a menace inside tallying a double-double with 12 points and 12 rebounds, missing just two shots on the night. Next week, the Brotherhood take on Goon Squad, who now is 6-1 on the season.

“They were the number two team in the league, and it got real close,” the Brotherhood’s Derrick Davis said. “We faced a team that we already know faces crazy deficits and comes back to win, but we were lucky enough tonight to pull it out.”