Balanced Sportslook attack too much for Air Ballers 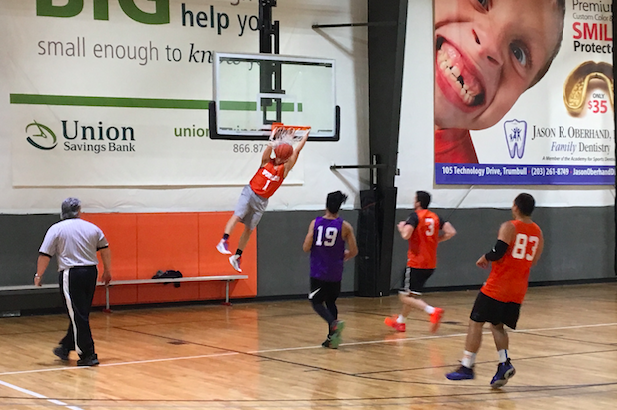 To the surprise of few, The Air Ballers found themselves overmatched in their week nine matchup with Sportslook. Eight straight losses quickly turned to nine as this game would essentially be out of reach after the first quarter. Sportslook would ultimately roll over the Air Ballers, 105-48.

Sportslook came into this game licking their chops as all but one player on their team would finish the night in double digits. In a night where they would win by 57 points, everything went right for Sportslook. Production came from all over their bench, especially from Joey Cecio. Cecio turned in his best performance of the season, finishing with 17 points. He was locked in from behind the arc hitting five of his nine attempts.

Cecio would not be alone when it came to having season best performances. Nick Bacarella, the motor of this Sportslook team, turned in a season-high 26 points to lead all scorers. Scott Corchard continued to dazzle running the point for his team nearly ending the night with a triple double. Corchard would finish with 10 points, nine assists and eight rebounds.

It has been no secret that this Air Ballers team has been outmatched this season. They deserve some props for sticking it out and never mailing it in at any point. Jaylon Smalls has given his team all he can week in and week out. Smalls would be one of three players on his team to hit double digits.

Pablo Rosa would end up being his team’s high scorer with 15. The Air Ballers are slated to take on a strong Goon Squad team in the first round of the playoffs. It will take a premiere performance from these underdogs to pull out the upset.

With the win and finishing the regular season at 7-2, Sportslook finds themselves sitting pretty with a first round bye and our third overall seed in the playoffs. Look for them to take advantage of the extra rest as they prepare themselves for another playoff push that will hopefully see them back at the Championship game.