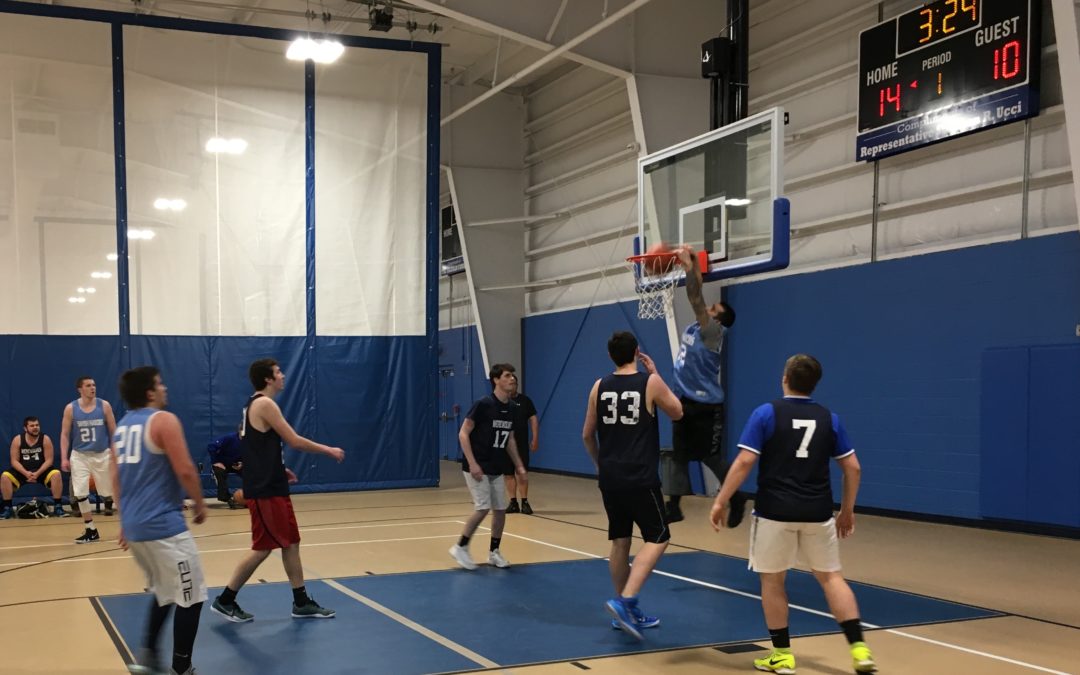 Tyler Barbosa had a breakaway layup and a chance to seal the Swish Kabobs‘ fifth victory of the year Wednesday night, with the hopes of giving his team a chance at second or third place heading into the postseason. Instead, he put it up too hard and the ball slammed off the backboard and sailed over the rim. The Swish Kabobs lost after giving up a dunk on the assuming possession.

Barbosa’s Swish Kabobs were down two points to the Werewolves in the final seconds, looking at what could have been their fourth straight loss after starting the year 4-0. But a day later, Barbosa got the ball on the left elbow, pump-faked two defenders into the air, and sunk a 3-pointer, pulling his team ahead 69-68. They went on to win 70-68.

“I had a horrible attempt last night,” Barbosa said. “I felt like I had to make it up to my squad tonight. We needed a big win, and we got it.”

The 3-pointer was one of six Barbosa connected on Wednesday night on his way to 28 points. Barbosa also tallied seven boards, three assists and three steals on the night. Tezhan Massey poured in 17 points, followed by Nick Custodio with 12.

While the Swish Kabobs were able to celebrate tonight’s regular season finale with a win, it wasn’t all sunshine and rainbows for the once first-place squad. They were down double-digits in the third quarter after the Werewolves started the second half on a 14-3 run. Brian Heston dropped 30 points with 10 rebounds and four blocks. Gino Forte and Brad Allen had 19 and 14 points, respectively, while Allen added 11 boards—seven of them offensive.

However, Barbosa’s huge fourth quarter was enough to erase the Werewolves run and bring the game back within striking distance.

“I had to step up my energy a little bit,” Barbosa said. “We were down double-digits, so we really needed it. They made a run, and it really just came at the defensive end.  We had to pressure the ball, communicate, switch, play very aggressive. We couldn’t be afraid to get beat. We did a lot better job towards the end of the game.”

Both teams look very different from when they started the season. Allen has become an interior force to reckon with, pulling down offensive rebounds and finishing put-backs aggressively and above the rim. He has been the third scorer the Werewolves needed to elevate their game. The Swish Kabobs looked unbeatable through the first four games, but have come down to Earth since then. If they can flaunt a full bench next week, it could be a problem for the Werewolves, as they don’t have much guard depth past Heston and Forte.

“We scored the ball well for stretches, but got stagnant at some times,” Barbosa said about the team’s play heading into the playoffs. “We need to work on that. Brad Allen was a force down low, so we really need to be ready for that.”