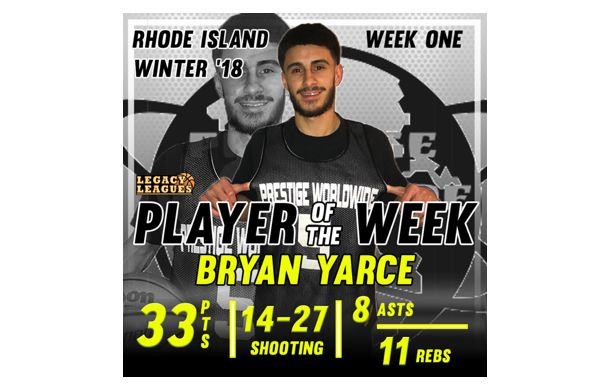 In an eventful Week 1 in Rhode Island, we had a lot of new faces take the court for the first time on Wednesday night. One of the most impressive players was the point guard of a new team, Prestige WorldWide, Bryan Yarce.

Yarce really controlled the pace of the game and was able to rack up a near triple-double, finishing with 33 points, 11 rebounds and eight assists. He was also named the Player of the Week, capping off a successful first week in the Legacy Leagues.

Yarce was in control of the game all night, and seemed to do it all for his team in a blowout win over the Halfway Crooks. He attacked the rim constantly, with a lot of high-flying and crafty finishes around the basket. Yarce also did a great job of kicking the ball out to his teammates, who were able to knock down open shots. Maybe most importantly, every time the Halfway Crooks chipped away at the lead, he was there with an answer.

Aside from all of the highlight plays and big numbers he put up, the thing that stood out the most was how effortless Yarce seemed to make it look. He has a very smooth game, which allows him to get to his spots, take care of the ball and score in bunches.

But Yarce expects for some of his teammates to join him and have big games of their own in the upcoming weeks.

“A little bit more of team play, now that we kind of have some chemistry,” Yarce said. “It was the first time all of us playing together.”

Even as his teammates become more involved, I still don’t see Yarce’s roll slipping too much. He is a very well-rounded player, and is too good for him to not get his night in and night out. Remember the name Bryan Yarce because this definitely won’t be the last we’re going to hear of him this season.