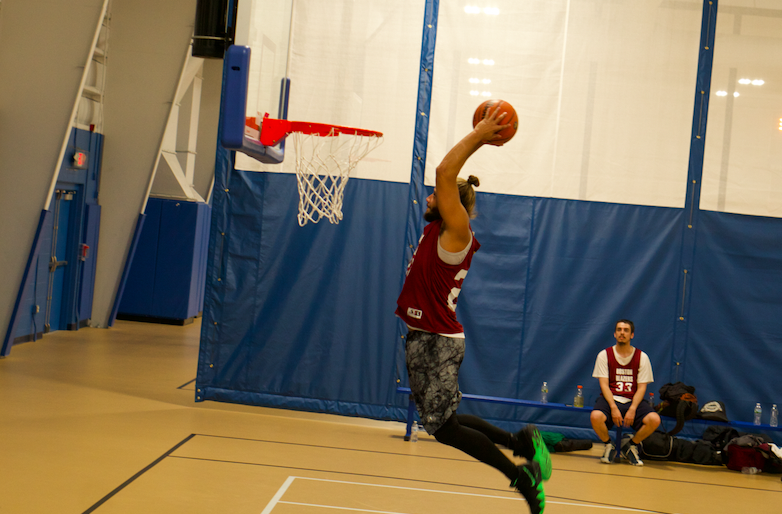 The Boston Blazers came into Wednesday’s game up against a Boom-Shakalaka team without two of their best players. As a result, they took over the second half and wound up with their second straight victory, 81-59.

Even without Lucas Martin and Cole Ferguson, Boom-Shakalaka was able to keep the game close during the first half, trailing by just six points. It was the third quarter when the Boston Blazers blew the doors off of their opponent. They scored 31 points in that quarter alone, and won the second half by a score of 51-35.

Corey Strickland took charge again, following a 34-point performance last week, and led his team with 19 points and 10 rebounds. The team came with a balanced offensive attack, as four players scored in double-figures, and everyone recorded at least four points.

“We’ve gotten adjusted to the 8.5 foot rims,” Strickland said of his squad’s winning ways. “We’re moving the ball around, we’re not run-and-gunning it anymore, slowing it down. We have a lot of big presence, and we’re using that to our advantage.”

For Boom-Shakalaka, Marc Belleville’s performance was a silver lining from their second straight loss. He led all scorers with 28 points and kept them in the game for much of the first half. Nathan Volatile added 15 points and 12 rebounds, while Jeremy DiMicco scored 10 points and also pulled down a dozen boards. Aaron Knapp contributed six points and six rebounds.

“We had to capitalize on them having four players,” Strickland said. “Not gonna lie. We’re coming out next week even hungrier.”

For the Boston Blazers, they’ll look to stay hot and keep their win streak alive as they play the Dujes Boys next week. Boom-Shakalaka will look to rebound from these past two losses and get back over the Mendoza line next week against the winless Pizza Rolls.