Blood, Sweat and Beers continues to prove they belong, this week hold off Pandas 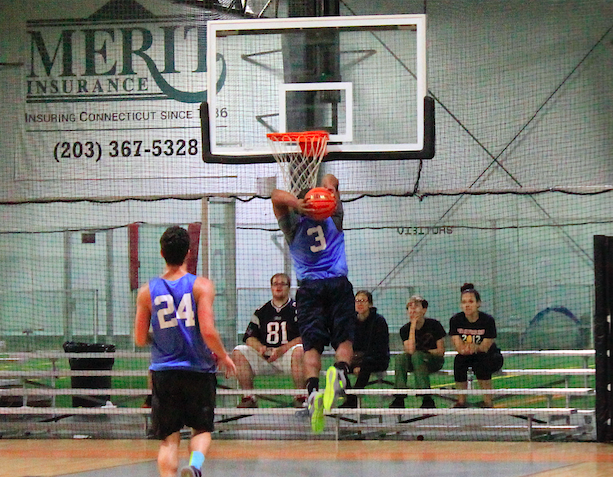 Blood, Sweat and Beers have admittedly played with a chip on their shoulder the past few weeks, saying that they feel they have not gotten enough respect around The Legacy League. The team came out and shook the standings last week by knocking Sportslook out of the ranks of the undefeated.

On Tuesday, the team held onto its established second-place spot in the league standings by defeating The Pandas, 62-60.

“We feel good. We were happy to get some recognition,” Blood, Sweat and Beers’ Cody Dileonardo said. “We just came out confident. I like where we’re going forward.”

Charlie Dannenberg extended Blood, Sweat and Beers’ lead to five with a couple of free throws in the final minute. The Pandas countered immediately with a quick basket. Joe Spain stole the ensuing inbound, turned and dunked to make it a 61-60 game in the final seconds.

The Pandas went on to intentionally foul Lutters, who missed the first free throw, but sank the second with 1.5 seconds on the clock. The Pandas called a timeout to advance the ball to the front court. Joyner threw the ball into Spain, who turned and heaved a 3-pointer that rang off the backboard to end the game.

“We had a lead early. I thought we were going to play a little better,” Dileonardo said. “[The Pandas] are a good team. They came back, and I’m happy we got a win out of that.”

Lutters led the scoring for Blood, Sweat and Beers with 16 points on 4-for-9 from beyond the arc. Dileonardo, Josh Brolet and Luigi Garafano each finished in double figures as well, sinking five field goals apiece.

“We have some shooters. We get hot sometimes,” Dileonardo said. “People think we just steal and dunk, but we can shoot sometimes.”

Spain returned from an absence in Week 5 by scoring 16 points and gobbling 16 rebounds. While his return was not enough to secure The Pandas a victory, teammate Jay Thompson says his presence made a difference.

“[Spain] definitely added some scoring and some extra defense,” Thompson said. “Down low, nobody can really go up to him. Every time they see him, they get scared and for good reason.”

The Pandas will look to end their three-game losing streak against ZewCrew (4-2) next Tuesday, as Blood, Sweat and Beers will look to take down the new-look Wake and Blake (3-3).

Although Blood, Sweat and Beers may not have wanted the game to come down so close to the wire, Dileonardo says the tight contest will pay dividends down the final stretch and into the playoffs.

“Not a lot of these games are close,” Dielonardo said. “I’ve seen some close games every now and then, but it’s good to have those ones under your belt for when we get to the playoffs and play some tough teams. We have that experience going into the playoffs.”