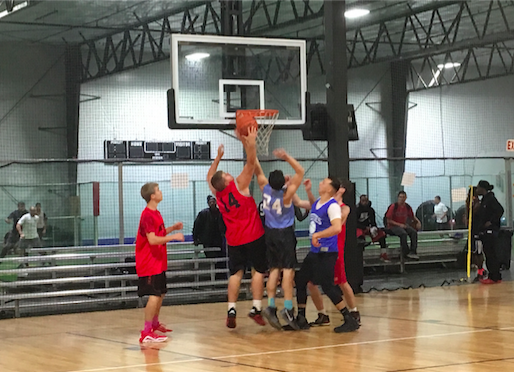 Mike Cody’s 26 points were not enough to help One Time get their first win of the season. BS&B ended their three-game losing streak, winning 67-62, in a tightly-contested game Tuesday night.

Despite their 0-7 record, One Time battled neck-and-neck with BS&B, on the back of Mike Cody, who also chipped in ten rebounds and five steals. Kyle Murphy also showed up with 13 points and nine boards. One Time will have one last chance to record a win next week against the Cereal Killers.

A seesaw battle that saw numerous lead changes, countless turnovers, and porous free-throw shooting culminated with the winless One Time squad finding yet another way to lose.  Free throws proved to be One Time’s Achilles heel, shooting just 3-for-9 from the charity stripe.

For this team, leaving six points on the line and losing the game by five is the seventh way they have to lose this year. Another weakness has been their outside shooting, converting a paltry 22-percent from three-point-land on the year. One Time hopes to play upset as we enter into postseason play. Short of a ‘Christmas miracle,’ they will be winless heading into the playoffs; they will hope Cody can propel them to a monumental upset as the 11 or 12-seed.

Despite capturing the victory, BS&B struggled mightily against winless One Time. They did have five players in double-figures, with Cody Dileonardo once again leading the way with 14 points and his tenacious defense. John Lutters also chipped in 14 points, and Cole Biagetti registered 12 points and 8 rebounds. BS&B will look to give the Brotherhood their first loss next week in the regular-season finale next week.