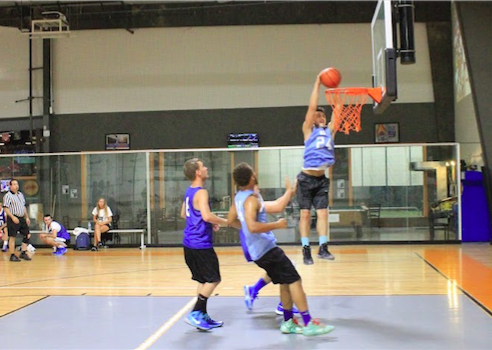 Straight from the tip-off, Blood, Sweat and Beers knew this matchup was theirs for the taking, and they certainly didn’t disappoint. Run TMC made it game in the fourth, going on a huge run to cut the deficit to ten at one point, but would not get any closer as BS&B secured their seventh win in eight games, 90-74.

BS&B jumped out to an early 8-0 run over Run TMC and didn’t stop there, getting a lead up to as many as 23 points after the first quarter. It began with a traditional BS&B setup in the early stages, with the majority of their points coming from set plays, but as the game went on they took a page out of The Brotherhood’s book and the fast break became their go-to option.

On the other side of the ball, Run TMC struggled to create many chances. This week’s matchup really ended up relying on the three-point opportunities from Will Hudson and Kyle Murphy, who fell just short in their efforts. Hudson finished the matchup with 42 points on 18 three-point attempts and Murphy threw up a solid 15 points over 4-of-10 from the field.

Despite a huge game from Hudson, BS&B took home the victory by 16 points, and had players score 20+ points for the first time this season.

This BS&B squad has really turned out to be something special. From week one, not many people would have picked this team to be among the top teams in the standings heading into the final week of the regular season. They don’t win by luck or by the talent of a superstar; it’s all about cohesion with this squad.

“We have great teamwork,” BS&B’s John Brolet said. “That’s just what we lean on. The thing about our team is that we have a lot of great players; anyone can have a great night. Every week, we have a different player to watch. We just have a lot of people that can score.”

Looking ahead to the final week of the season, BS&B will have a tough matchup against ZewCrew, who kept their game against The Brotherhood close this week. Keeping their winning streak alive will be very important heading into the playoffs, because a win will seal the deal on securing the second seed.

Run TMC will be facing The Land in week nine, who edged out an overtime victory against Sportslook. Run TMC needs to get a win in week nine to gather some sort of momentum heading into the playoffs.