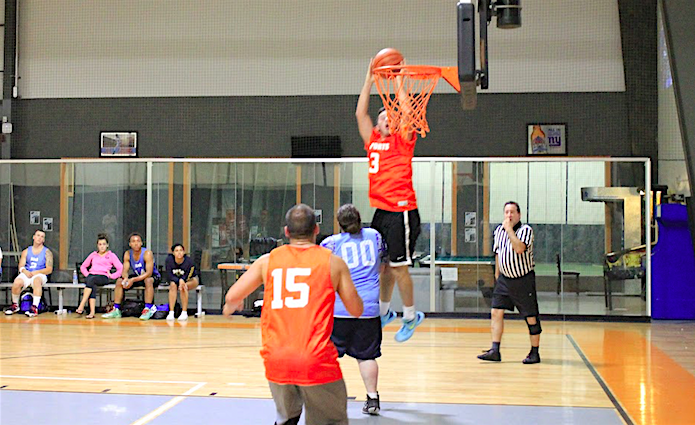 Blood, Sweat and Beers point guard John Lutters described the Bryan Acevedo and Andrew Cavanagh combination as “scary” as he looked ahead to Thursday night’s matchup against Sportslook. Yet at the same time, he believed his team had defenders capable of stopping the newfound duo in order to advance to the championship game.

Lutters was right about one thing. BS&B held the pair to just 33 points just a couple of days after Acevedo and Cavanagh combined for more than 60 points in the quarterfinals. Most would call that a success, but Acevedo and Cavanagh were not the cause of BS&B’s elimination. The Sportslook supporting cast was the difference in their 66-52 win over BS&B.

In their first matchup back in the regular season, BS&B held Acevedo to 25 points on 10-of-33 shooting while Cavanagh did not play. Many thought that BS&B would not be able to handle both Cavanagh and Acevedo in the rematch. However, they shot a combined 11-for-31, almost identical to Acevedo’s numbers against BS&B just a few weeks ago.

While Acevedo and Cavanagh have been the main talking points lately, the Sportslook supporting cast deserves all the credit in this win. Colin Markus scored 14 points while accumulating 7 rebounds. Johnny O’Brien scored just eight points, but his seven offensive boards played a huge role in the win.

Even though Nick Bacarella scored just eight points, the stats don’t really show you his true role. In the quarterfinals, John Lutters sent the game to overtime and ultimately sent Run TMC home. Bacarella was defending Lutters all night, holding him scoreless and limiting him to just three assists. Bacarella shut the facilitator down.

Let’s not forget another member of Sportslook’s supporting cast, Owner turned back into Coach Steve Christy. He was on his team all night to pressure BS&B’s ball handlers, resulting in 12 team steals.

Much like their loss to ZewCrew in Week 9, BS&B could not establish an offensive rhythm against Sportslook, scoring just six points in each of the first two quarters. But what killed them the most was their lack of success from the free throw line. The team shot an abysmal 26.9 percent from the charity stripe. Their 19 misses from the line made the difference in a 14-point loss. BS&B beat themselves in the end.

John Brolet and Cody Dileonardo combined for 31 points, but it wasn’t enough to override the poor night from the free throw line, not to mention their 1-for-14 shooting night from behind the 3-point arc.

Sportslook will now play the still undefeated Brotherhood Tuesday night in the championship game at 9 p.m., where they will play for the Napa Auto Parts Championship Trophy.