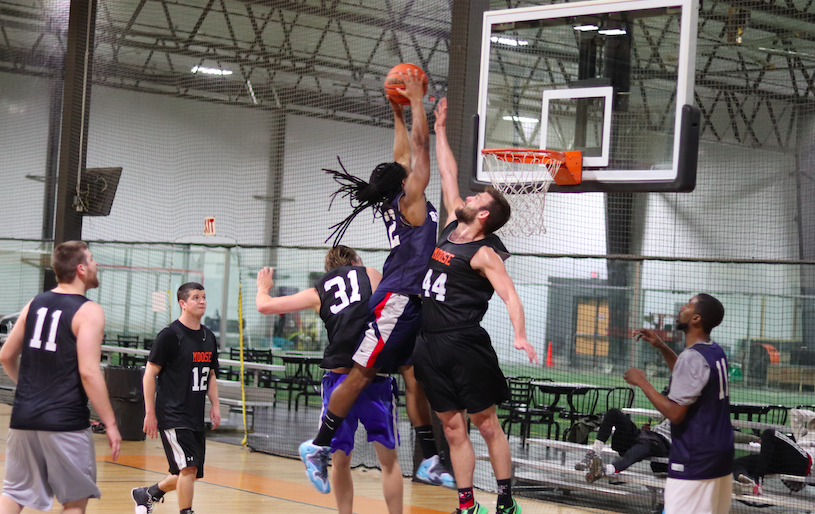 The slated Week 5 “Game of the Week” did not disappoint, as the Blue Devils barely snuck out with a 77-64 over Team Moose. The final score not telling how the entire game actually went.

The first quarter was all Team Moose, as they outscored the Blue Devils 17-10. Their defense was on lockdown to start the game. The Blue Devils started out slow due to a lot of miscommunication on both sides of the ball. However, the second quarter would be a complete turnaround for the Blue Devils.

They outscored Team Moose 22-17 in that second quarter, 14 of those points coming from Mike Davis. Team Moose stayed in the game and led at half, 34-32. Davis finished with 31 points, including six from 3-point range, five rebounds, six assists and five steals.

“What we changed was we locked down on defense,” Blue Devils Steven Echols said.

Team Moose’s defense kept the Blue Devils offense quiet in the third quarter, allowing only seven points throughout those 10 minutes. Their own offense would score 14 points. Kevin Blake had 22 points on the night. Brad Seaman and Josh Balabuch both had 10 points. Seaman finished with a double-double, adding 11 rebounds.

The Blue Devils came out to play in the fourth quarter. Midway through the final period, the game was tied at 56, and within a minute later, the Blue Devils had taken their first lead since 3-2 in the first quarter. Team Moose was still in it as they were down 65-62 with 1:27 left on the clock.

Within the last minute-and-a-half of the game, the Blue Devils offense exploded, having 38 points in the fourth quarter. They finished the game on a 12-2 run and came out with a 13-point victory.

“I was told I had to step up, so I stepped up,” Blue Devils Devon Pratt said.

The Blue Devils will face Carmine Santorelli and the Temptations in Week 6 while, Team Moose will play The Throne and their hot shooter Jason Hernandez.