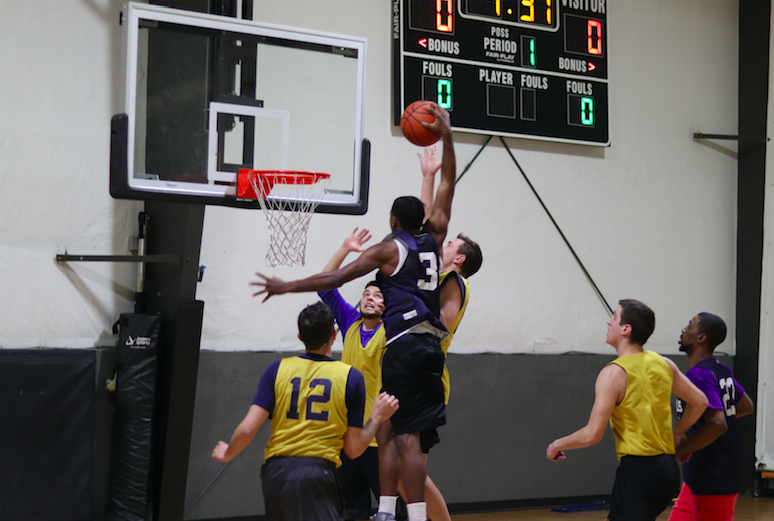 In the Quarterfinals on Tuesday night, The No. 2 Blue Devils fought back from down early in the first quarter to knockout The No. 7 Flint Tropics, 59-51. The Flint Tropics came out firing in the first quarter, going up 12-3 within the first five minutes. They were moving the ball quickly down the floor, causing them to put in easy layups and dunks. The Blue Devils came out hot after being down 11 points at halftime. They gained a rhythm shooting the three and they never looked back.

For The Blue Devils, Mike Davis scored 26 points, as well as dishing out three assists. Davon Pratt was very impactful scoring 16 points and grabbing eight rebounds. Pratt’s late pair of 3-pointers helped to secure the win for the Blue Devils. Early in the game they were struggling to shoot the ball due to Flint’s physical defense, but as the game progressed, The Blue Devils were able to make adjustments and capitalize on The Flint Tropics’ weaknesses.

For the Flint Tropics, Mike Bozzuto and Nick Japs combined for 32 of their team’s 51 points. Japs was 54.5 percent from the field and also grabbed seven boards—including three offensive—in order to gain extra possessions for Flint. They were off to hot start, outscoring the Blue Devils 16-8 in the first quarter, but in the second half, turnovers and poor shot selection caused easy transition buckets for the Blue Devils.

“It was a great game. We came from behind, pulled through and showed why we are No. 2,” Blue Devils Steven Echols said. “Don’t matter who we are playing next week, we are going to win.”

The Blue Devils will take on The No. 3 Chasers in the Semifinals next week.