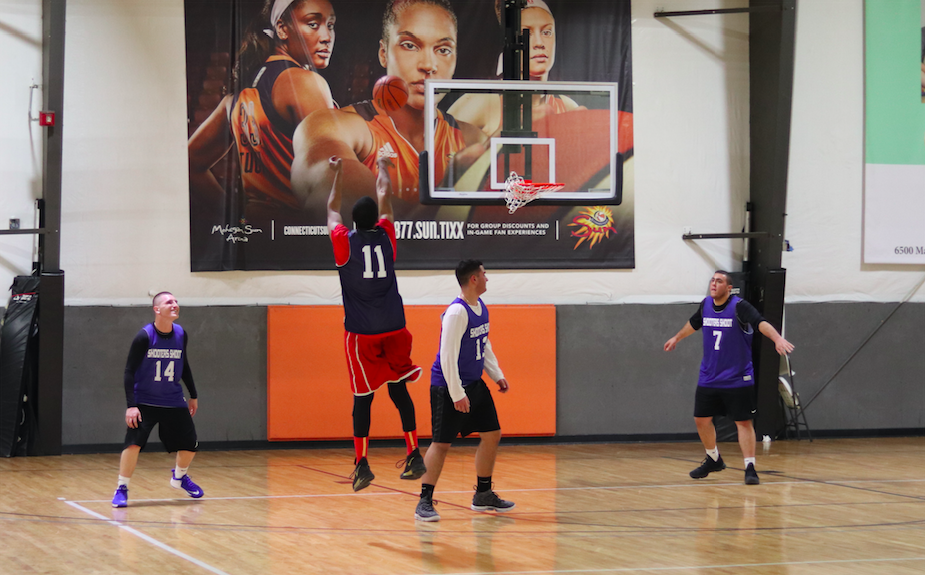 With both teams looking for their first win of the season, it was the Blue Devils who were able to come out of Week 2 with a victory. It was ultimately the shooting of the Blue Devils that would lead them to a 102-63 win over Shooters Shoot.

“It feels great. Everybody was cooking,” Blue Devils’ Steven Echols said. “Everybody did what they had to do.”

The first half of the matchup went back-and-fourth, with both teams coming out strong offensively. There were multiple lead changes throughout the first half with neither team being able to hold on to a significant lead.

On the other side of the ball, neither team played much defense in that first half. Depsite that, Shooters Shoot were still in the game, only down two at the half.

The second half was all Blue Devils. The Shooters Shoot were shut down by their oponents defense in the second half. As a team, the Blue Devils dominated the boards by bringing down 37 rebounds and 25 steals. A full court press would be the biggest factor in getting the Shooters to turn the ball over.

“That had mostly to deal with me,” Blue Devils Devon Pratt said. “I’m the coordinater of the whole thing.”

The Blue Devils outscored the Shooters 37-12 in the third quarter and 68-31 in the entire second half.

Michael Davis led all scorers with 32 points, making 10 of 16 from 3-point range. The Blue Devils got some extra offensive help from Destin Simmons and Pratt who combined for 46 points. Davis and Pratt each had seven assists.

Luke Riccio and Brandon Guittard posted 33 points for Shooters Shoot. The team also brought in 25 total rebounds, but it was ultimately their 17 turnovers that would cause them to lose the game.

Shooters Shoot will be up against a tough test in No Limit (2-0) next week, while the Blue Devils will face a very dominate offensive team in The Chasers (2-0).

“No more losses for the rest of the season,” Zacarri Graham said. “Straight W’s.”