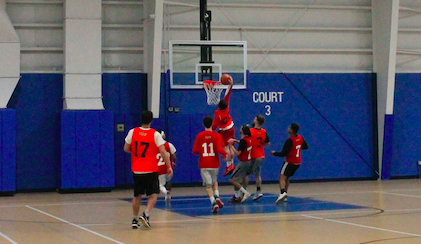 It took multiple clutch plays late in the fourth quarter, but Boom-Shakalaka was able to hold off the upset-minded Duje’s Boys, 81-73, on Wednesday night in Rhode Island.

The first half was completely dominated by Boom-Shakalaka but they faltered in the second half, with Duje’s Boys even tying the game up at one point in the third quarter. Boom-Shakalaka was able to use a late 8-0 run to secure the victory and improve their record to 4-3.

Despite only having four players, Boom-Shakalaka was able to rely on Jeremy DiMicco for 32 points, 14 rebounds, two assists and two blocks. Marc Belleville also added 17 points, 16 rebounds and eight assists in the victory as fatigue was almost their downfall late in the game.

Boom-Shakalaka is going to have to finish out the season strong if they want to make a deep run in the playoffs. Right now there seems to be more teams that can outplay them, so they are going to have to bring their A-game the rest of the way.

Next week they face off against a formidable Alaskan Bullworms team, who have shown they are a gritty team to play against. They have a very good chance of being a surprise middle of the pack team with their 4-3 record so expect them to ride the underdog wave the rest of the season.

Duje’s Boys were almost able to pull off an epic comeback but they just couldn’t seem to get shots to fall late in the fourth quarter. Anthony Melise led the team in points with 20, and John Coutu added a triple double with 19 points, 18 rebounds and 10 assists. Jordan Lugo also added 18 points, five rebounds and three assists in the defeat.

Duje’s Boys returns to action next week to face a very tough Swish Kabobs squad. This will be an important matchup for them as they look to make up lost ground heading into the postseason as they sit on their 2-5 record.