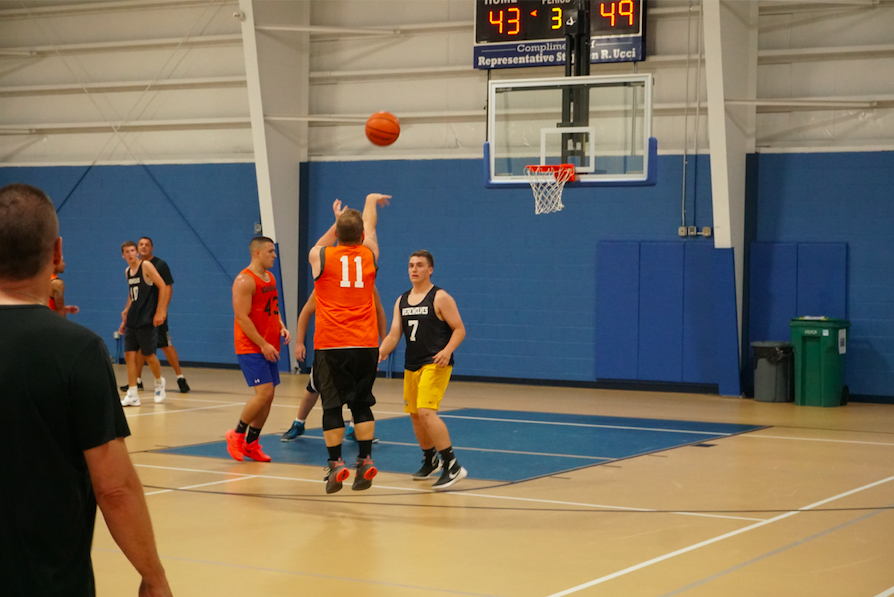 The no. 1 team has officially punched its ticket to a Finals appearance and it’s a familiar face heading back to the Legacy Leagues Rhode Island Championship Game.

Despite a no. 1 vs. no. 4 Semifinal matchup, top-seeded Boom-Shakala and the Werewolves played a tight game deep into the fourth until Boom-Shakalaka used a second-half comeback to secure a 74-66 victory on Tuesday night.

After going down by nine points at the half, Nate Sitchell was the catalyst that sparked his team to a fourth quarter run through a few spectacular plays beyond the arc.

First, he completed a four-point play after draining a fall-away corner three, then made it a two-point game when he hit a deep three in Boom-Shakalaka’s next possession. Afterwards he drained yet another three-pointer to once again cut the deficit to two points.

Sitchell saved his best for last.

Following a couple of clutch shots from Matt Camara and Marc Belleville to eventually tie the game, it was Sitchell who splashed an in-your-face three over Brian Heston to give his team its first lead of the night at 63-61.

The Werewolves cut the lead back down to one off of Gino Forte’s sharp shooting. Forte showcased the touch from deep all night on 50 percent shooting from three. The Werewolves finally earned a 66-65 lead back via a Heston’s big play down low.

From there, the lethal due of Sitchell and Belleville led Boom-Shakalaka to victory. First Beleveille’s clutch layup put the game at a three-point margin, then Sitchell drained free throws and made a steal on the defensive end to officially ice the game.

“I don’t think anybody was too worried about finishing the comeback,” Sitchell said following his team’s win.

On the Werewolves side, both Forte and Heston combined for 65 percent of their team’s scoring on the night, but as a whole could only manage to lead the way against the no. 1 seed through the first three quarters of the game.

Don’t forget that Boom-Shakalaka’s comeback effort was all done without premiere big man Trevor DiMiccio too.

“It was tough not having Trevor here,” Belleville said. “He controls the paint on our team, so they were getting down low, kicking it out to a lot of shooters and we were collapsing.”

Boom-Shakalaka looks to have Dimiccio back in time for the Finals, which will be played against Cody Crawford and no. 2-seed Lob City on Tuesday, August 21 at 8 p.m.