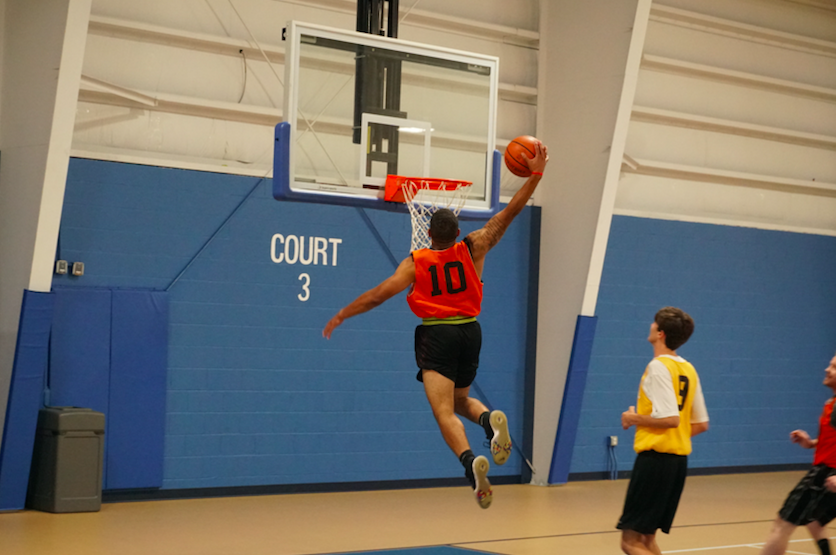 A deep Boom-Shakalaka roster outnumbered their opponents and it showed on the scoreboard. From Marc Belleville, the game’s leading scorer, down the roster, Boom-Shakalaka had more energy and ability to finish throughout the contest.

“We’re like the Warriors out here,” Brandon Sullivan said. “We have two full lineups of straight All-Stars.”

Nate Stichell got his team’s juices flowing early on with a pair of flashy dunks. Belleville capped off a dominant first half by draining a buzzer-beater to put his team up 61-28 at the break.

Later, Matt Camara finished off an and-1 dunk to get his team going in the latter half, before they finished off the leagues’ lowest seed with ease.

Despite the team shooting 43.9 percent from the field, Shake N’ Bake’s difficulties started with the lack of bodies present on the court. They played with just four players and no opportunities for substitutions over the course of the game. Playing against not only a skilled team, but a full team will take a toll on anyone.

Aside from Luke Swift’s 29-point game, Boom-Shakalaka was able to defensively shut down their opposition leading them into the Semifinals.

Next week, they’ll take on the no. 4-seed Werewolves after they escaped an exciting two-point double-overtime win over the fifth-seeded Bucket Chasers.

The last time the two teams met, Boom-Shakalaka won by 22 points, but after a playoff game that provided a momentum swing, they have to be ready for anything thrown their way.

“Really hustle up and down the court, rebound, throw lobs, play defense,” Sullivan added about what his team needs to carry into next week’s playoff game. “That’s what it all about.”

If these aspects of the game are executed, Boom-Shakalaka should have no problems punching their ticket to the Finals.