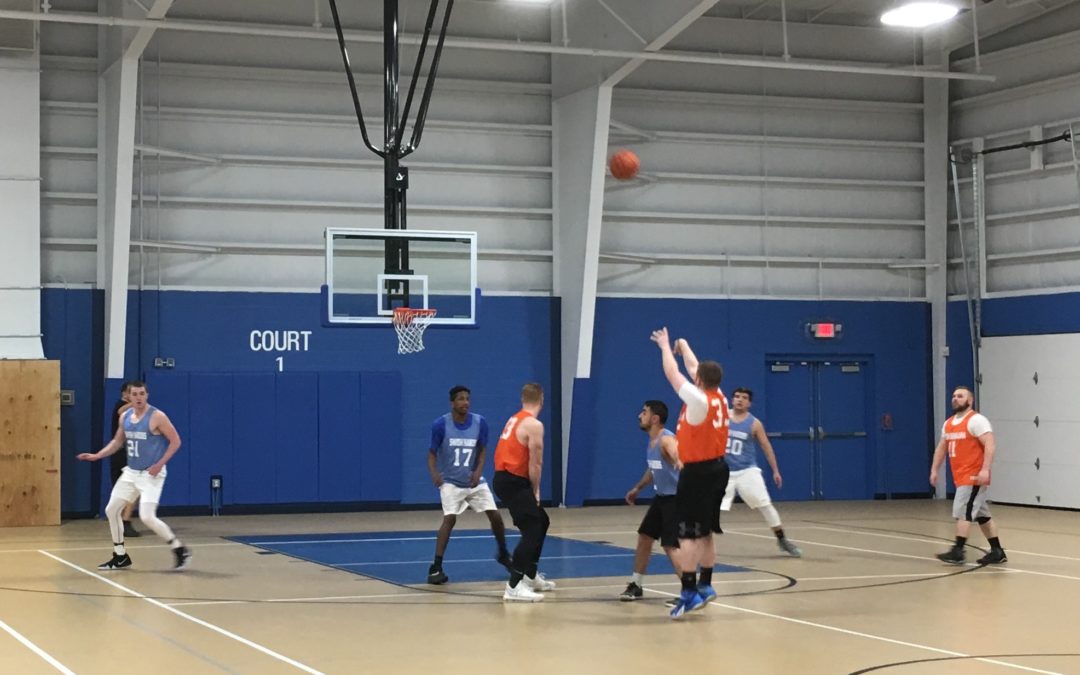 Boom-Shakalaka had some added motivation going into their Week 8 game. They were busy on Twitter prior to tip-off, talking about how they feel they do not get enough respect, and tonight’s play mirrored that mindset.

Coming out of halftime the game was only a difference of two points. However after a big second half Boom-Shakalaka handed Swish Kabobs their second-straight loss, 83-71.

Matt Camara led the way for Boom-Shakalaka with 17 points, connecting on 5-of-9 three pointers. He caught fire at one point pulling up from anywhere and knocking them down. With one of the leagues star big men, Brandon Sweeney, down low the team is a lot more confident shooting, knowing he will come down with any misses. Sweeney grabbed 13 rebounds Wednesday night.

Add in Nathan Stichell’s menacing defense and freak athleticism and this team is extremely tough to beat. They have proved how difficult they are to beat all season currently sitting at 5-1. This is also with Ryan Rawnsley, who can stuff the stat sheet, missing some games.

It was not all bad for the Swish Kabobs as they showed flashes of the team we know they can be. Every run they made Wednesday night was matched and in the end they just did not have enough to get over the hump.

Kyle Valenzuela led the team in scoring with 20 points as he relentlessly drove to the hoop and tried to bring his team back. The Swish Kabobs now have lost two in a row after their hot start to the season and currently sit at 4-2.

The difference in this game was the third quarter. Coming out of the half Stichell was everywhere defensively, and Camara seemingly could not miss. Lucas Martin did his usual thing, showcasing his ball handling ability, range and shifty finishes.

Next week the Swish Kabobs will look to avoid continuing a losing streak as they take on the Wild Hogs. They handled the Wild Hogs earlier in the season in what ended up being a chippy game.

The Wild Hogs have a bit of positive momentum for the first time this season coming off their first win against the Average Joes, so next week should be a good one.

On the other side Boom Shakalaka will look to add another victory as they face off against the Green Squad. The Green Squad is coming off a huge 40-point victory against the Halfway Crooks. Cody Crawford put up 54 points, so he will definitely be a focal point for the defense. Green Squad handed Boom their only loss of the year making this a must-see grudge match.