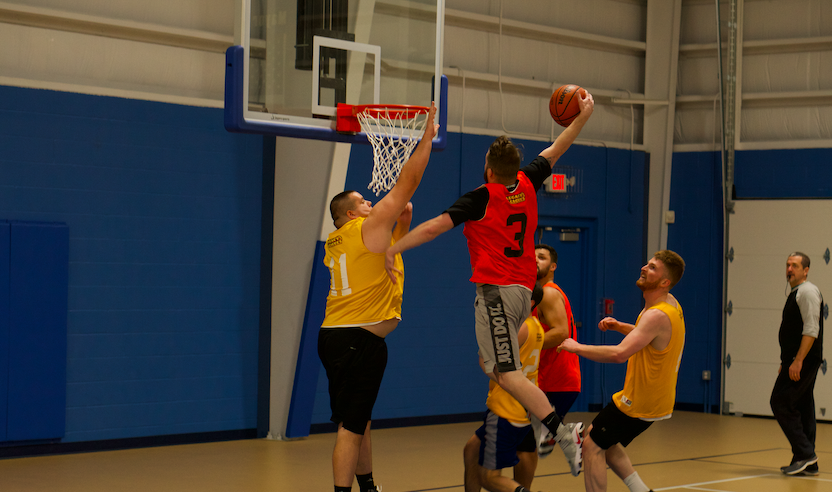 In a matchup featuring two teams from the first Legacy Leagues season in Rhode Island, Boom-Shakalaka gets a 59-51 victory over the Skyhookers. Lucas Martin led the way for Boom-Shakalaka with 16 points, eight rebounds and four assists. For the Skyhookers, Zach Ward and Brendan O’Donnell were the only players to score double-digit points, with 13 and 11 points, respectively.

Both teams struggled from the field with the Skyhookers shooting 35.1 percent and Boom-Shakalaka shooting 30.1 percent. Part of the reason Boom-Shakalaka came away victorious was because of their +6 turnover margin, with them only turning the ball over 7 times compared to their opponents 13.

Although both teams grabbed 44 rebounds, Boom-Shakalaka’s work on the offensive glass is another part of why they won snatching six more rebounds than the Skyhookers. Jeremy DiMicco had himself a great night on the boards, with 16 of them, although he did struggle offensively with just 4 points on 2-of-8 shooting.

For Cole Ferguson, it was his debut in the league and he had 13 points on 5-of-16 shooting. After the game he mentioned a key to the win was the work on the glass.

“We played pretty hard, we crashed the glass a lot,” Ferguson said.

For the Skyhookers, they’ll look to bounce back next week and try to improve their shooting percentage along with their free throw percentage. It’s going to be tough to beat a team like Boom-Shakalaka while missing seven free throws. Next week, the Skyhookers look to get their first win of the season against the Alaskan Bull Worms, who are 1-0 on the season.

For Boom-Shakalaka, they play against the 1-0 Werewolves next week, who have proven to be a tough matchup for Boom-Shakalaka in the past. They will also have to improve their field goal percentage that they shot from the field against the Skyhookers.

Ferguson said something he wants to build on is their play as a team on the court.

“Just staying vocal, playing with each other, moving the ball around,” Ferguson said are the keys to earning another victory next week.