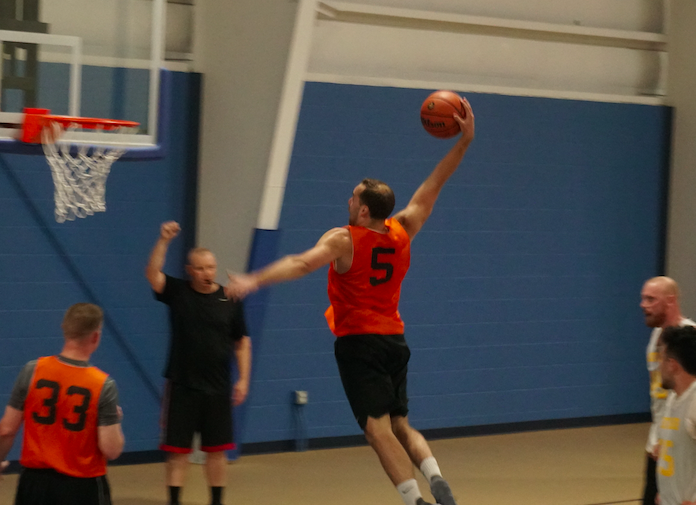 Boom-Shakalaka snatches another W behind an all-out team performance. Five different players scored in double-digits to make them 3-0 as they take down the Bucket Chasers, 78-67

Boom-Shakalaka looked shaky out of the gates during this one. They entered the half down three points to the Bucket Chasers thanks to stellar performances from Sergio Dalomba and Aiden Wright. Dalomba led the team with 19 points, while Aiden tallied 13 of his own.

“We started off pretty crappy,” Boom-Shakalaka’s Ryan Rawnsley said. “Then we just started hitting shots, raining everywhere, and blocking shots. Nate (Stichell) was up, teleporting all over the floor. He’s an animal.”

The third quarter told a different tale, as Boom-Shakalaka wasn’t ready for that first loss just yet. The Bucket Chasers were outscored 30-15 in the third and Boom-Shakalaka never looked back.

Trevor Dimico and Lucas Martin dropped 13 and 12 points, respectively. While Nathan Volatile and Matt Camara made their presence known with 10 points each. A total of nine different players reached double-digit points in this game with the last two being provided by Bucket Chasers: Henrique Goncalves (12 points) and Antonio Graziano (11 points).

The key stat in this game turned out to be turnovers, as the Bucket Chasers gave up the ball 14 times, which was twice as many as Boom-Shakalaka. The ability to take advantage of these turnovers can often be the difference in a close game like this one.

The undefeated Boom-Shakalaka squad will meet the winless Wild Hogs in Week 4 after a heartbreaking defeat at the hands of Swish Kabobs. Meanwhile, the Bucket Chasers has a matchup with the other winless team, Shake N Bake, who were crushed by Lob City this week.