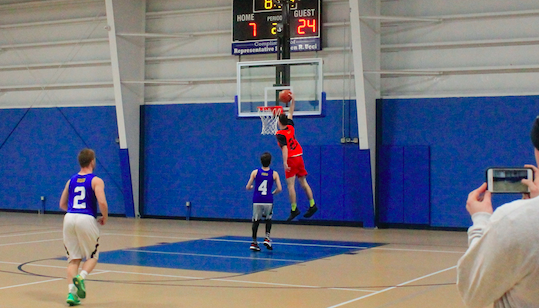 Boom-Shakalaka picked up a much needed win against the Pizza Rolls Wednesday night, 99-61.

Boom Shakalaka got off to a hot start early on, holding the Pizza Rolls to just seven points in the first quarter which proved to loom large as the game went on.

Boom Shakalaka scored 21 points in the first to jump out to the early lead and they never seemed to look back. Marc Belleville put on a show with 35 points and an amazing 16 rebounds. He was helped by Lucas Martin who had 28 points of his own. Cole Ferguson and Jeremy DiMicco also helped lead the offensive charge both scoring in double digits. Ferguson collected 18 points while DiMicco’s 13 included nine rebounds.

It was not just the offense that was the theme in the Wednesday night contest, Boom Shakalaka’s defense was up-to-par as well. As a team, they had 41 total rebounds with 30 of them coming from the defensive end which dominated against the Pizza Roll’s 25 total team rebounds.

The Pizza Rolls tried to mount a comeback as the game went on after their tough first quarter, scoring 18 in the second led by Benjamin Floyd who had an eventual 22 points for the game. But Boom Shakalaka’s defense came up big once again in the third quarter shutting the Pizza Rolls down and holding them to 9 points.

That proved to be too much for the Pizza Rolls to handle and it allowed Boom Shakalaka to come away with the convincing victory.

Boom Shakalaka will look to gain some ground in the standings next week against the Halfway Crooks, while the Pizza Rolls will look to get back on track as they take on the Swish Kabobs.