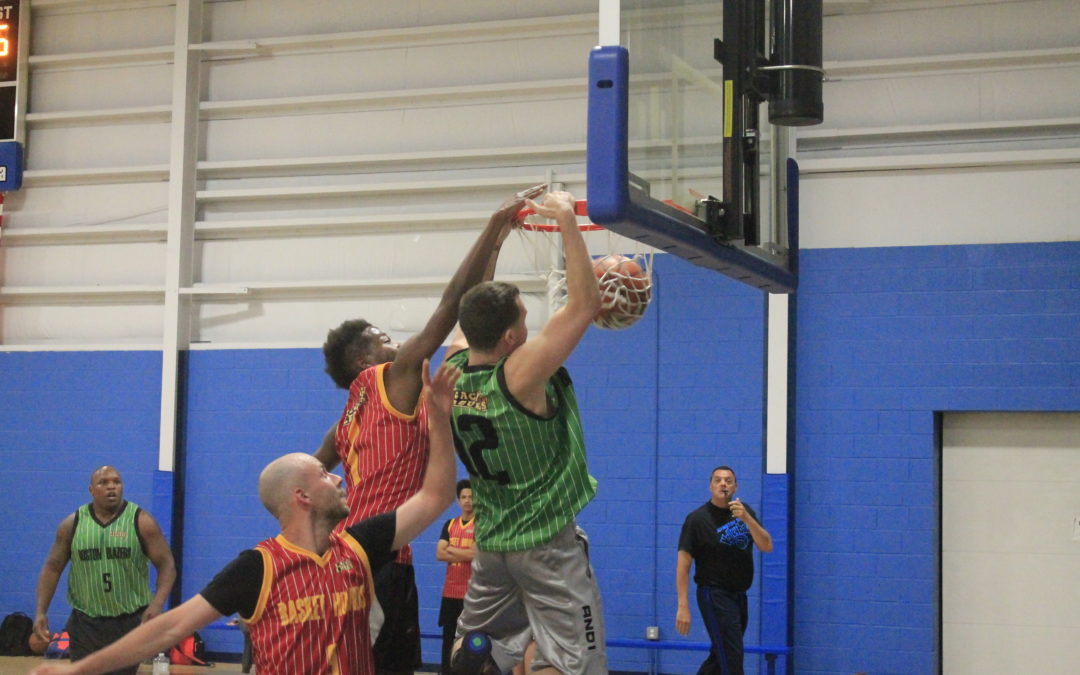 The first game of every season is a fresh slate for every team. Expectations and hopes are high, and for the only time in the season everyone has a tied record. The first game was a matchup of veterans versus rookies, strength versus speed, and experience versus lack there of. Experience is what made the difference in this one, the Boston Blazers bullied their way to a 91-64 victory over the young upstart Basket Hounds.

The Blazers didn’t need to play a perfect game to win this matchup, but Ade Bright thought he would do so anyway. Bright went an immaculate 10-10 from the field, and 4-4 from the charity stripe to notch 24 points. He also added four rebounds, and two assists just for good measure.

“Be patient, know your role, try to keep pushing it but push it at your own pace,” Bright said. “Don’t try to go with us (Boston Blazers), slow the game down.”

The Blazers got out in transition all game using their huge size, skill, and strength advantage to push the tempo, and dominate the pace of play.

“We told ourselves we were going to come out here controlled, but as the game went on we changed up our game plan, and said ‘up the tempo, keep running,” Bright said.

Bright wasn’t the only contributor for the Blazers on the evening, as former All-Star Captain and Rookie of the Year Corey Strickland added 17 points, two rebounds, and two assists. James Mitchell, Terrence Gallo, and Robert Boynton were also double digit scorers on the night. The Blazers put out an all around well balanced team performance.

Lack of experience hurt the Basket Hounds, but they didn’t role over and let the Blazers pet their belly. They put up a strong effort led by rookie Mike Bartholomew. Bartholomew scored 24 points on 9-27 shooting, and 6-21 from down town. Orane Smith also filled it up with 21 points, four rebounds, and five assists. Tony Tallini pitched in for 13 points and seven boards too. Not a bad performance for a young team in their first Legacy League game of all time, but the veteran team took it to them.

Boston knew exactly how to take advantage of the smaller Hounds squad, by using their size and strength to bludgeon them on the boards, and in the paint. The Blazers pulled down 12 offensive rebounds which was good for second in the league last night.

They also only attempted 13 threes on the night which was the least in the league. Their experience showed as the majority of their shots came from within the paint where they knew they could dominate, and many times were ferocious dunks on the young Hounds.

The league might be in trouble with this team, because the Blazers are the hottest team on offense to start the year. If they can keep it up this will be a dangerous squad to face going forward.

“Nice to be here again, season two with us and we’ll be back for many more years. Y’all in trouble,” Bright said.