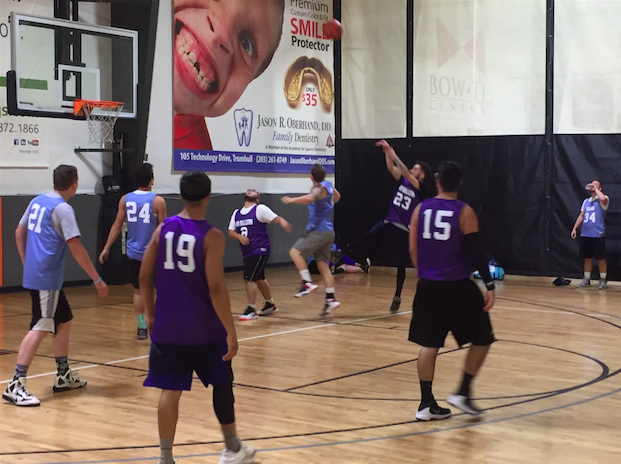 Blood, Sweat and Beers found themselves on the winning end of another physical matchup, as they outlasted the Air Ballers, 66-45, on Tuesday night.

Facing a rough loss to the Cereal Killers last week, the Air Ballers seemed to be without an identity both offensively and defensively, but Tuesday night showed some signs of life. Jaylon Smalls led the Air Ballers with 22 points, going 4-of-9 beyond the arc, while Pablo Ramos added a team-high four steals.

“We’ve got to make better decisions,”  Ramos said. “We’re playing good defense, but we’re not getting the calls we’d like.”

It was all Blood, Sweat and Beers Tuesday night though. John Brolet had a monster performance recording his first double-double of the year: 16 points and ten rebounds. Brolet added two steals, and really set the tone for BS&B early, as he roved the paint and cleaned the glass. Cody Dilenardo added 14 points and five rebounds.

“We definitely put some sweat out there… maybe a little blood,” exclaimed Blood, Sweat and Beers’ Quinn Bennett.

Blood, Sweat, and Beers will look to continue their undefeated start against another winless team in the Titans next Tuesday, while The Air Ballers will try to get their first win on the season against the also-winless Kekambas next week.