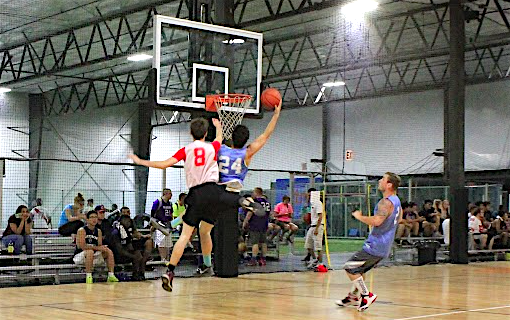 Blood, Sweat and Beers has once again found a way to add to their already stacked collection of wins, after defeating Wake & Blake, 72-49 Tuesday night. Eli Todd’s impressive 18 points, nine rebounds, and three steals were a big part of the team’s overall performance.

However, the unity and teamwork of Blood, Sweat and Beers (6-1) is what has been helping them remain successful through this season, who are now tied for second place in the standings behind only The Brotherhood.

“Man, we just play together and as a team, to help get us over the hump,” BS&B’s John Lutters said.

Now, Lutters ended with only nine points, but it was extremely impactful because each of those points came at just the right time. Towards the end of the 2nd quarter, he buried three big shots from downtown.

“I don’t know, sometimes it just gets going, and you just gotta let it fly,” Lutters said.

Along with Lutters’ shooting came his great playmaking and game management skills that helped elevate his teammates. Lutters established himself as the floor general who made the game easier for everyone on his team, finishing with eight assists. All of Blood, Sweat and Bears players ended up on the scoresheet, and Pat Gibson and John Brolet joined Todd in double figures.

On the other hand, Wake & Blake did not seem ready to play, and looked out of sync, which could also be said about Aaron Samuel. Samuel was held to just 19 points, after having a monster debut last week.

By the time halftime rolled around, Wake and Blake were already down by 18 points, and looked fatigued from trying to contain Lutters shooting.

Kevin Bott broke down what needed to happen at the halftime break for his team to turn things around.

Wake and Blake will hope to bounce back next week when they take on the last winless team in the league in The Hateful 8. Blood, Sweat and Beers has an interesting matchup ahead of them in Week 8 against Run TMC (3-4).