Byrd and the Three-Headed Monster march through Air Ballers 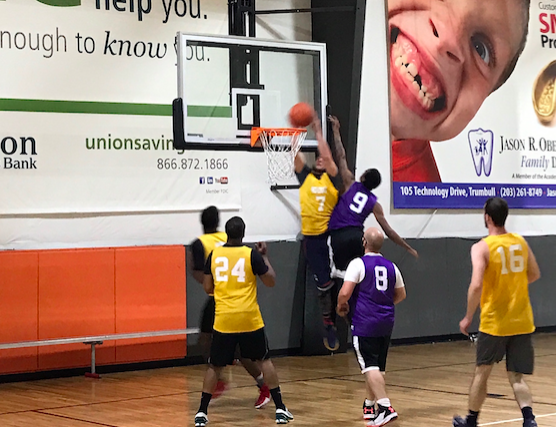 Dunk after dunk the Air Ballers had nothing to show for as No Limit ran right past them from the beginning. After a devastating loss to Run TMC in week seven, the “three-headed monster” disfigured the inexperienced Air Ballers squad, 109-58.

With only two players showing up for the Air Ballers at the beginning of the game, No Limit was ready for the death match to be over. As the whistle blew, two other players for the Ballers entered the facility with their jerseys and basketball shoes on. Just like week seven, The Air Ballers only had four players and no bench to show for, all but knowing they would lose from the start.

“It’s mad hard to get back especially since we don’t have a full squad, but the second half we need to come out stronger with more defense,” Air Ballers Kevin Mazo said. “Time is against us and were down a lot, but we need to start playing defense and stop them from scoring.”

Unfortunately the Air Ballers were unable to maintain a defensive stance and gave No Limit an easy look to the basket every time down the court. The “three-headed monster” and Ronte Byrd were all able to put up at least 20 points, which gave them a triple digit score in the win. No Limit seemed like they were having too much fun and not preparing for the last week of regular season and the upcoming playoff schedule.

“We annihilated them, we were too much for them and they couldn’t guard any of us,” Ronte Byrd of No Limit said. “The ‘big three’ needed to step it up, and as a matter of fact, start calling it the ‘core four’ and put some respect on my name.”

With the playoffs drawing near, Ronte Byrd and No Limit need to start playing hardcore defense if they want to make an impact and have a legitimate chance to seek a championship. No Limit faces the 2-6 Kekambas next Tuesday in the last week of the regular season, who are significantly better than the Air Ballers squad. No Limit must work together to improve their holes on the defensive side of the ball.