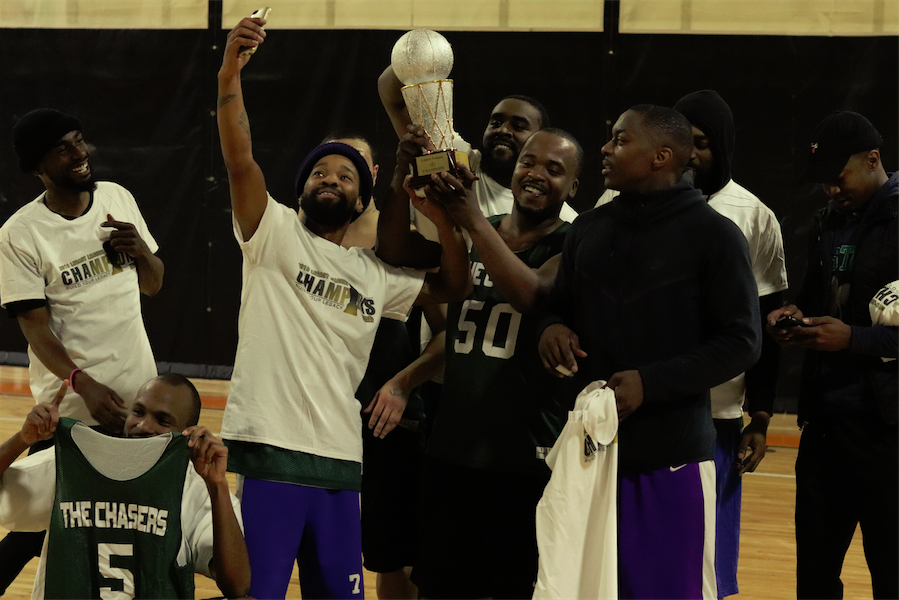 For new teams in this league you will often see a difficult transition period. The style of play is intense and teams who play intimidated get eaten alive. For The Chasers, in their first season they finished 12-1 and took home the CT Winter 18 Finals Championship. To reach the mountaintop The Chasers had to face the lone opponent who beat them in the regular season, Mike Davis, Davon Pratt and the Blue Devils in the Semifinals. After getting revenge on the Blue Devils, The Chasers took down an undefeated No Limit team in an instant classic, 68-59.

For a team with nothing to lose but everything to prove, The Chasers came to show the league why they joined and what everyone can expect going forward. We have heard all season about how good the Washington brothers are, we know they can play.

No Limit needed to lock down the pair if they wanted to hold up the trophy at the end of the night. While they were able to contain Jerry Washinton to only 10 points, The Chasers had another secret weapon at their disposal in the massive paint presence of Jayron Vines.

This league is dominated by furious dunks and precise shooting from downtown so typically the fundamental “big man” never really gets his chance to shine. However, championship-caliber teams find ways to utilize every player on the roster in the best way to win any particular game.

After finding a weakness in the No Limit defense, The Chasers exposed a mismatch down low that would lead to high-percentage offense. Vines started eight games this season and found himself heavily incorporated into the mix from tip-off to the final seconds in the most important game of them all.

“The plan was to get Jayron the ball,” The Chasers David Armstrong said.

Stats don’t always showcase a player’s capability and performance on the court. While he posted 32 points against the Monstars in a 21-point win the final game of the regular season, he played one of his best games Tuesday night.

There was no one on No Limit that could keep Vines from getting rebounds off the glass or hold him back from getting those crucial second chance put backs. His work down low allowed the team’s leading scorer Diontay Washington to fire away from behind the arc with the confidence that his misses would be scooped up.

He finished with 14 points, second most on the night, behind Diontay Washington who had 26. For his continued excellence on the offensive side of the ball and overall high-energy and balanced production, Washington was named the CT Winter 18 Finals MVP.

For No Limit, this game meant everything. The Winter 18 CT Finals was their third Finals appearance, after losing both of their first two appearances to The Monstars and The Brotherhood. Unable to get the monkey off their back, they would find themselves on the losing side again.

A clearly frustrated No Limit showed their inexperience playing from behind and got rattled when they found themselves down. An uncharacteristically low scoring night from Eric Singleton would prove costly as his struggles seemed to send waves through the whole bench. Sharpshooter Howie Miller was unable to connect from behind the arc and former MVP Tarell Vargas only shot 33 percent from the field.

The Chasers closed out their inaugural season with a 12-1 record, only losing in Week 3 to the Blue Devils. After checking every box on their postseason checklist by settling the score with the Blue Devils, The Chasers found themselves in the promised land in their first and only season.

With one championship under their belt, The Chasers aren’t looking to stop there. When asked if they would defend their title in the Summer 18 season, The Chasers Dathan Gray kept it short and sweet.