Close, but no cigar: The Brotherhood edges Goon Squad by 5 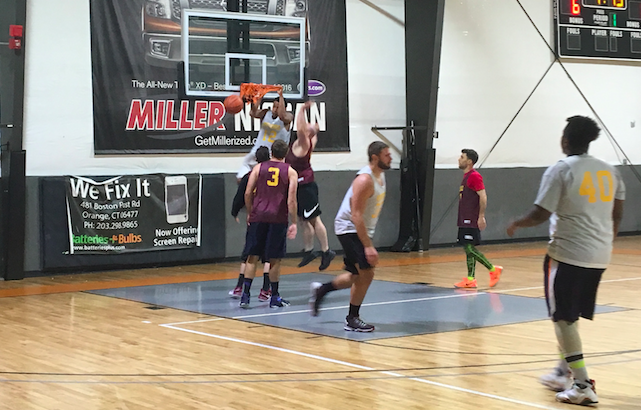 In a game that was back and forth, both physically and verbally, we saw Goon Squad play one of their best games Tuesday night, as they scratched and clawed on every possession never giving The Brotherhood any relief. Yet it was still not enough to take down the juggernaut, as Michael Davis and his squad capture their 8th straight win this season, 60-55.

Goon Squad found themselves down 17 at halftime, and were looking for something to help them get back into this important game.

“We’ve got to limit their looks underneath, they’re getting way too many easy looks,” Goon Squad’s Brandon Massaro said.

They shifted the momentum in their favor coming into the second half, locking down on the Brotherhood’s paint presence, while Matt Marconi found his stroke, going 4-for-9 from three and dropping 31 points in the game.

“We’re the top dogs,” The Brotherhood’s Fibril Chisholm said. “Everybody’s trying to knock us off.”

After, arguably, facing their toughest opponent this year, The Brotherhood was able to absorb the blow the Goon Squad dealt and kept rolling. Michael Davis’ 16 points led a very balanced scoring attack from The Brotherhood and snagged the win. They will look to make it a second-straight undefeated regular season next week as they face-off against BS&B.

Goon Squad will look to stay in a comfortable playoff spot if they can get a win against a very fast Temptations squad next week.