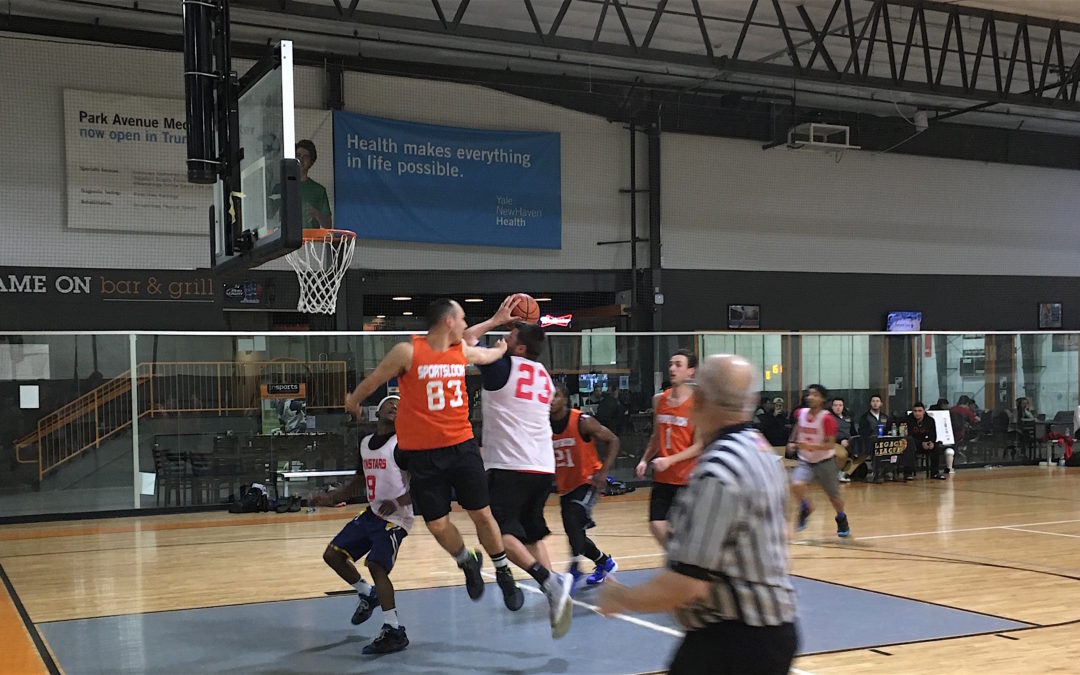 In his return following a two-week absence, Mike Cody was crucial in the Monstars’ 54-49 win over Sportslook. Despite a sloppy performance on both sides of the ball, the Monstars would hit its free throws late in the game and would come away with a well-earned victory.

“[Mike] Cody stepped up today big time,” Reggie Stewart of the Monstars said. “He was hitting threes, taking it hard and playing defense.”

The highly anticipated game marked the start of the first round of the Legacy Leagues Winter ’17 playoffs, which will run through the month of April. The matchup of the game featured two of the league’s perennial scorers in the Monstars’ Reggie Stewart and Sportslook’s Tyrell Holmes, both of whom would trade buckets throughout the game.

Coming into the game, Sportslook was tough to judge as they have struggled to win this season when neither Scott Benzing nor Tyrell Holmes suited up to play. Monday night’s playoff matchup would give the Monstars the advantage as Sportslook was once again without its most consistent playmaker in Benzing. In his place, Christian Allen and Scott Gallo would earn extra minutes and attempt to fill in for the versatile guard.

As expected, Holmes and Stewart would make it a hard-fought matchup as it was a back-and-forth battle from tipoff. While Nick Bacarella helped Holmes by attacking the basket and playing aggressive defense, Sportslook would give up an early 15-10 Monstars lead after the first quarter.

The first half was tightly-contested as both teams shot the ball fairly well and would see an even spread in scorers. At the break, Mike Cody would lead all scorers with 13 points on 5-of-7 shooting from the floor as the Monstars lead it 33-22.

“We had to grind it out. There was a lot of fouls,” Stewart said. “Not getting any calls, so we just had to keep playing. We had to play our game and stay mentally strong.”

The second half was be a much more interesting one as the Monstars would allow Sportslook to cut the lead to within two points. Christian Allen seemed to be chucking up shots from everywhere while his teammate Holmes would aggressively attack the basket on every possession. The two were key in helping Sportslook come back with the Monstars leading 43-33 at the end of the third quarter.

When asked about what lead to the near Sportslook comeback late in the game, Stewart simply said, “Defense. We lack defense. We got caught up in fouls, caught up in the refs, so we just had to keep playing.”

With just over a minute remaining, Sportslook would be forced to send Stewart to the line, allowing the Monstars to run away with the game. Stewart would shoot an impressive 5-for-6 from the charity stripe, providing a crucial window of opportunity for the Monstars to seal the deal late in the game.

After Steve Niggebrugge of Sportslook missed a corner three late in the game, the Monstars knew they got the win in the book. Despite the loss, Tyrell Holmes had a dominant performance and left everything on the floor as he finished with a game-high 20 points and 7 rebounds.

With the win, the Monstars will wait to play the winner of Stranger Danger and the Temptations, which will take place Tuesday at 9:15.