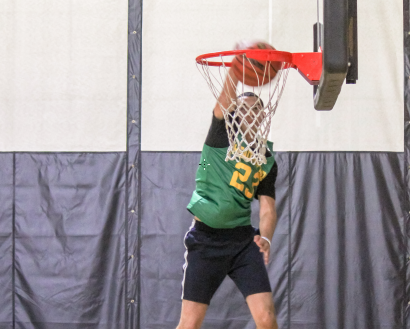 The Head Hunchos got their first win of the season on Monday Night with a 78-66 win over Above the Rim. The slow-paced game was mostly controlled by the Head Hunchos who were able to come out on top.

The story of this contest was the very slow paced action with only 27 points scored in the first quarter and a lot of missed shots and turnovers. There never seemed to be a pace or rhythm to this one as the two teams combined for 21 turnovers.

Brett Cody led the way with 27 points on six-of-ten from three shooting 69 percent and Keenan Carey added 17 points. The Head Hunchos also got production out of Danny Bartoli and Kevin Bott as they combined for 20 points on the night. Cody and Carey controlled the offense for the Head Hunchos and set the tone defensively in addition to getting it done offensively for the team. Cody is averaging 30 points so far this season.

Above the Rim was led by Shamar Knox who had 21 points, while Eric Windley and Javier Lopez combined for 25 points in the losing effort. They started off the game with only four players and never seemed to be able to find their team chemistry despite hanging around for most of the game.

Head Hunchos moved to 1-1 on the season and will face J’s Trey’s and Fadeaway’s in their Week 3 matchup with hopes to move above .500. Above the Rim dropped to 0-2 and will look to get their first win against Dinners Served next week.