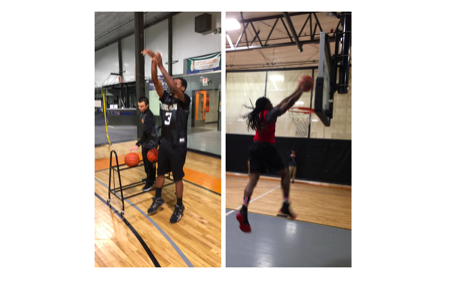 The contest would consist of two rounds as the top three scores from the first round would advance to the final. Freeman would hit the least amount of buckets, finishing with only nine points. Both Pratt and Rullan would struggle to find a rhythm as well, scoring just thirteen points as they would all fail to reach the finals.

Davis would have the most improbable comeback, as he would finish the first round with 18 points. Massaro and Shapiro would secure their spots in the final round tying with 19 points.

Shapiro went first in the final round, and would again tally an impressive 19 points. Massaro also repeated his first round score. as he tied Shapiro with 19.

It was all in Mike Davis’ hands as he would have to hit the 20-point-mark to take home the title. Davis would do just that, pulling off the improbably as he would score 20 points as he would be crowned the winner of the East Coast Garage Door three point contest.

The All-Star festivities would continue into the night as the dunk contest would showcase five of the best dunkers in the league. No Limit had two players, Howie Miller and Kevin Rivera, represent their squad and were arguably the two favorites to win it. Brandon Massaro from Goon Squad would also compete in the dunk contest following an impressive performance in the three-point contest.

Steve Echols of Stranger Danger would start off the first round with a Dominique Wilkins-like pump dunk and would be given a 28, the lowest score of the first half of the round.

Massaro would channel his inner Vince Carter as he would pull off the honey dip, catching the crook of his elbow on the rim, receiving a 31 from the four judges. Kevin Rivera would follow and brought out a special guest who he would dunk over to receive the contest’s second highest score with a 35.

No Limit’s Howie Miller, the defending champion, would hit a max vertical as he would be rewarded with a 34. Despite a strong first dunk from both Rivera and Miller, both would fail to complete a second dunk in the second half of the first round to advance to the final.

Markey DesRuisseaux, known for his ability to jump out of the gym, converted on a reverse pump-action dunk, receiving a 33. Echols converted a 180-windmill dunk in the second half of the first round as he would finish with 59.

Massaro would have a similar dunk, however he would add his own recipe to the mixture with a reverse dunk as he would receive a 34. DesRuisseaux would also have an incredible second dunk and would go between the legs, receiving a 38.

Echols, DesRuisseaux, and Massaro would all advance to the final round as each would be allowed one last dunk to decide the champion. Echols would go first, jumping over the basketball rack for the one hand slam, receiving a 31. Massaro would answer, converting on a 360 double-pump dunk as he would take the lead with 35. Like Mike Davis in the three point contest, DeRuisseaux would have to receive one point higher than his competitor to take home the trophy. Markey would go for a baseline windmill dunk, receiving a 26 as the 2017 Sportslook Passing League dunk contest champion.