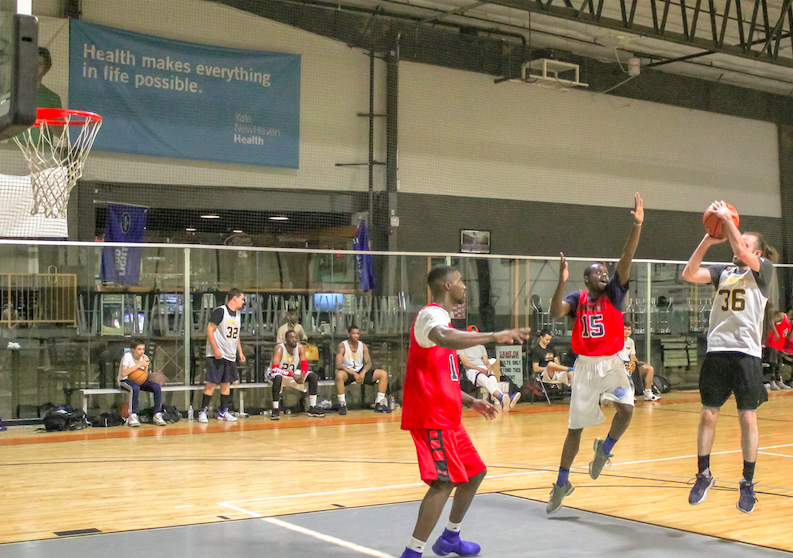 The Week 3 Game of the Week was an instant classic won 81-76 by Shocker City over the Rim Breakers in overtime.

Down two with less then seven seconds on the clock, Mike Davis took a strong drive to the hoop and finished to tie the game as time expired.

The overtime was all Shocker City. After Davis’s lay up at the end of regulation all the momentum was on Shocker City’s side as they used a 5-0 over time to defeat the Rim Breakers. This was a fast-past, high intensity, thrilling basketball game to watch. Whenever a team went on a run it was clear that they would not be able to pull away.

After being called out last week in a post game interview, Mike Davis led the charge with 21 points but none bigger than the ones he scored late in the fourth. Corey Jacobs had a huge game with 21 points and used his size to alter many of the Rim Breakers shots. Davon Pratt and Carmine Santarelli added 16 points and 11 points as well.

The Rim Breakers showed a lot of toughness tonight. Shocker City went on an 11-0 run in the third quarter to extend their lead to 13 and the Rim Breakers never quit. Gerald Mclease had a huge game with 24 points and Keivon Turnbull recorded a double double with 20 points and 12 boards. These two players really kept them in this game and battled every single possession. Every lay up was a battle and these two played a big role in that.

In an animated post game interview, Davon Pratt described this feeling of victory as “miraculous, with pleasure.” In a game filled with many adjustments Pratt says the biggest adjustment was getting everybody involved. We just really had to be patient.

Shocker City looks to remain undefeated next week as they take on J’s Treys & Fadeaways while the Rim Breakers look to bounce back against Above the Rim.

After this huge win, Pratt was vocal in declaring Shocker City as the team beat.

“Shocker City is going to be the team to reckon with, I am telling you,” Pratt said. “If you don’t think that you’re the best team, how are you going to play? Shocker City baby!”