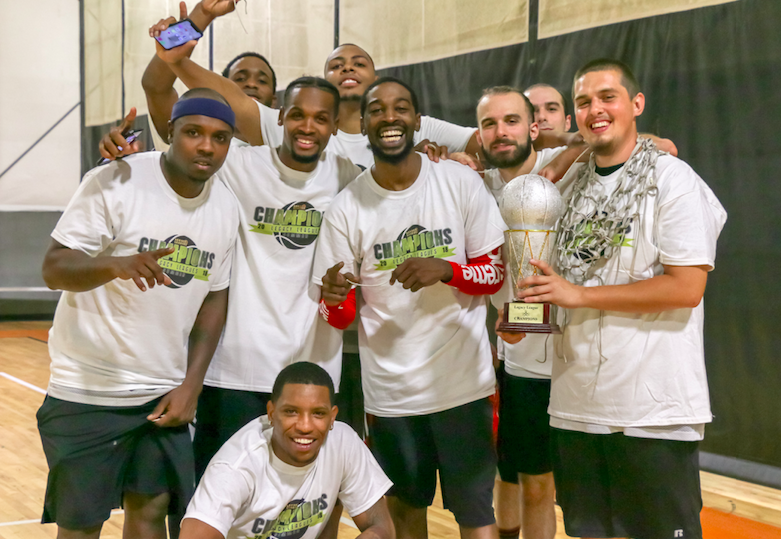 If there were doubts on the no. 1-seeded and undefeated Shocker City before, they finished a spectacular season with the ultimate cherry on top. In their first Legacy Leagues season, Shocker City utilized its full lineup to defeat no. 4 Run TMC, 81-74, to capture their first-ever Legacy Leagues Championship.

One of the most decorated players in league history, Mike Davis, earned Finals MVP honors after posting 28 points, highlighted by late-game heroics.

First, he slammed down an electrifying, late game and-1 dunk to put his team up by four points, then, after Run TMC made it a one-point game, he was able to find Davon Pratt on a dime to increase Shocker’s lead and finally he closed out the contest with clutch free throws to put the game out of reach.

Not only did Davis add another badge to his uniform with his second career Finals MVP following the impressive performance, but he is now a three-time Legacy Leagues champion as well.

“I just wanted to help my boys get their first [ring] and that’s it,” Davis said in the postgame celebration.

The neck-and-neck contest between two stacked teams began in favor of Run TMC when Kayjuan Bynum hit an early three to set the tone. From there, Shocker City came back with authority, going up by as much as nine points early on.

But the game changed course after Reggie Stewart knocked down a heavily-contested three late in the first quarter. After clawing back, Run TMC eventually tied the game at 31 off of Eric Singleton‘s flashy alley-oop. They then took a three-point lead when Stewart knocked down another shot from beyond the arc.

With 25 seconds left in the half, Davis went to work.

He knocked down a mid-range jumper to regain the lead, then made it a 44-40 game at the half after he drained a buzzer-beating fadeaway three over Bynum’s head.

“[We] just wanted to get the ball in the hole,” Davis added on his team’s simple game plan heading into the game.

The second half of the game saw more of the same back-and-forth action, but for Shocker City’s offense, it was guys like Tarell Vargas, who hit a couple of big-time threes and Pratt, who contributed when it counted down low, that made the difference. Shocker City is the loudest team in the league led by Chris Rudzinski and Davon Pratt and they made their presence known.

Add Nick Santorelli, who relatively contained Stewart, to the defensive mix and that depth is what led ultimately them to victory.

“Reggie [Stewart] started hitting so we put Nick [Santorelli] on him,” Carmine Santorelli added. “[We] slowed him down a little bit and he was still hitting every shot, but we did enough to get the win.”

Both Stewart, who finished the game with 34 points and Singleton, who tied the game at 67 with 3:41 left, did as much as they could to win the game back via offense. With 40 seconds left, the game was even within one point after Stewart nailed a layup, but it was simply not enough to secure the victory.

“Everybody on this team can average 20 [points] on any team,”Carmine Santorelli said prior to his team’s celebration. “We proved that we could all play unselfishly and win.”