Defending champs tell No Limit “no” in opener 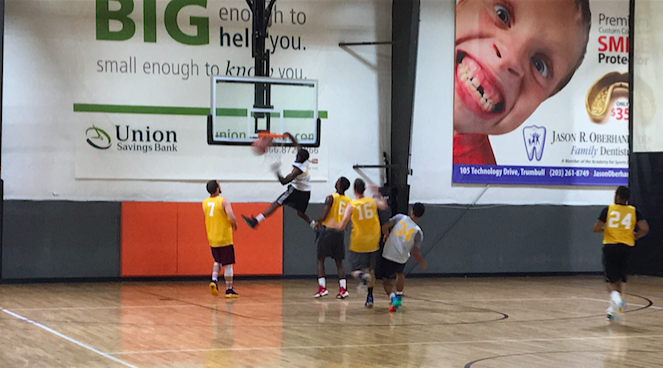 After hoisting the trophy last season, The Brotherhood began the Fall season with a victory, 86-80, over No Limit, who is one of the six new teams for the Fall.

The Brotherhood’s Russ Payton led the charge with 30 points and eight rebounds, with an effective 63 percent shooting from the field.  The defending champions were without reigning-MVP Michael Davis, but they showed they still have a plethora of talent to make up for his absence.

The Brotherhood only had one other player in double digits. Derrick Davis chipped in 23 points and seven rebounds, and  hit 4-of-5 three-pointers he attempted.  His sharpshooting will be key if they want to repeat as champions.

Jibril Chisholm, a point guard for The Brotherhood, has a message for the league.  “We are going to run-n-gun, [play] hella defense, and do more running,” Chisholm says.  “Our message to the league is: “run it up.” That’s our slogan.”

On the other side, No Limit had some bright spots in the defeat.  John Rullan and Howie Miller both shot 10-for-15 from the field. Rullan paced the No Limit offense with 26 points. Miller showed some good athleticism, and figures to be a key contributor for No Limit going forward.

No Limit actually outscored The Brotherhood in the second half, but their comeback fell just a little short.  They can hope to improve by focusing effort on the glass, where they were outrebounded by The Brotherhood 31-18.

The Brotherhood face another new team, the Titans, next week at 8pm. The Titans suffered a loss this week to the Santorelli brothers’ squad, the Temptations.

No Limit will square off against newly-formed One Time at 9pm next Tuesday. One Time suffered a 10-point defeat this week at the hands of Acevedo’s squad, Sportslook.