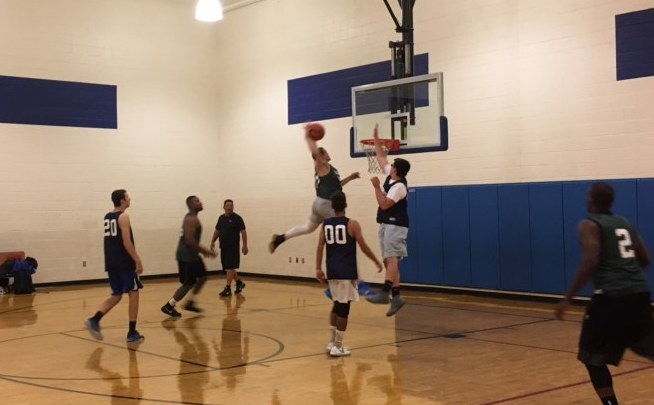 A game highlighted by The Alliance’s staggering defense lead them to their second win on the season with a 108-55 win over the previously unbeaten Werewolves. Max Matroni once again led his team in scoring with 36 points, and is the league leader in points averaging 35.5 points per game. Not only is he leading the league in points per game, but he also is doing it in efficient fashion on 63.8 percent shooting from the field.

The Werewolves drop to 1-1 on the season, but faced a very tough opponent in The Alliance. The Alliance was able to hold them to less points than the Werewolves scored in Week One, but struggled to keep up with them offensively.

Heston led the way for the Werewolves with 23 points on the night. He is third in the league in points per game with 27.0. Brad Allen had a fantastic night on the defensive side of the ball, contributing four blocks to add to his league leading tally of five blocks early in the season.

For the second-straight week, The Alliance blew the game open in the first quarter. This time, they opened the second quarter with a 14-point lead. After that, the Werewolves had a tough time catching up with The Alliance.

“We pride ourselves on defense,” Victor Kashouh Jr said. “We play defense that leads to offense.”

It ended up being a 53-point victory for The Alliance. The Alliance also dominated on the glass Wednesday night, as Darius Debnam led the way with 16 boards.

In what turned out to be a relatively easy win, players on The Alliance say they still see room for improvement.

“Limiting turnovers,” Kashouh Jr said. “We lose a lot of possessions (that way), and if we can limit (them) we’ll be fine going forward.”