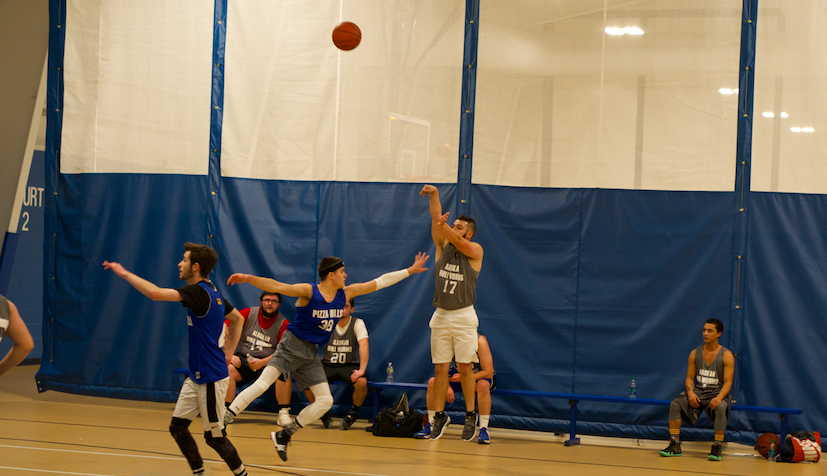 The Alaskan Bull Worms got off to a very slow start in their season debut. At the end of the first quarter they trailed the Pizza Rolls 16-4. However, they outscored the Pizza Rolls by 21 over the last three quarters to come away with a 61-52 opening night win.

The Alaskan Bull Worms had a lot of success scoring the ball in the paint. They shot 13 percent from 3-point range, but their inside play was the key to the win. Aaron Morell and Justin Simmons were a dominant duo throughout the game.

“We stopped shooting so many threes and started banging the ball inside,” Aaron Morell said. “Everyone kept driving, got inside, and got some fouls. When we started driving, everything turned.”

Morell started off the Winter season with an impressive double-double of 20 points and 12 rebounds. Simmons also contributed to the win with 17 points and six rebounds. The Alaskan Bull Worms attacked the basket with great success and were not able to be stopped.

On the other side for the Pizza Rolls, they also had a solid duo of Benjamin Floyd and Zachary Dionizio. Floyd led the team with 19 points and Dionizio threw in 14 points of his own. The Pizza Rolls relied on three-pointers way too much in this game, and weren’t have much success from long range. They shot 10-of-39 from three which adds up to just under 25 percent. The settled for a lot of tough shots which played a big part in their close loss.

The Alaskan Bull Worms definitely won this game because they changed their game plan after the first quarter. With a big team, they played to their strengths getting into the paint with ease.

Next week the Alaskan Bull Worms will take on Skyhookers (0-1) as they try to get to 2-0 on the young season. The Pizza Rolls will be taking on Halfway Crooks as both teams will be trying to get their first win of the season.