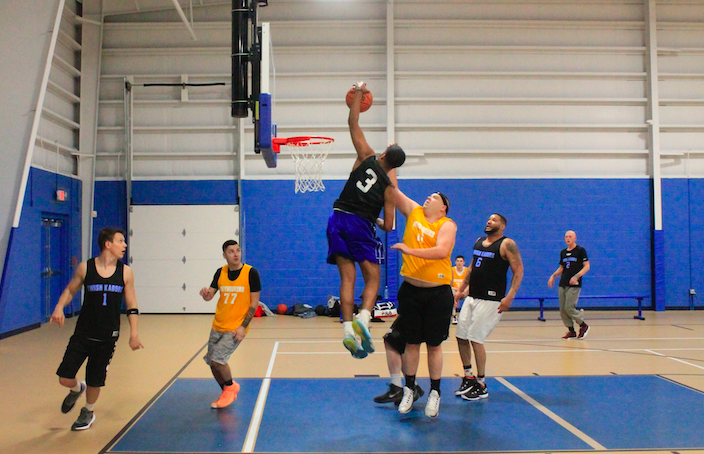 The Swish Kabobs stay undefeated in a tight victory over the Skyhookers, 58-52. The Swish Kabobs are one of only three teams still undefeated. Tyler Barbosa led the way with a double-double on 17 points and 11 rebounds.

The fourth quarter was key to the Swish Kabobs victory, outscoring the Skyhookers 17-11 in the quarter. Greg Bell talked after the game about how they wanted to finish the game off, “We just wanted to take good shots, control pace, make sure we get dunks.”

Del Butler made his season debut and was instrumental in the win with 15 points on 6-of-9 shooting to go along with seven rebounds. Greg Bell, along with Butler and Barbosa, two other players were in double figures for the Swish Kabobs. Bell also mentioned how important of a midseason pickup Butler is, “He’s 6’3, athletic, can handle like a guard, can jump and dunk.”

For the Skyhookers, Brendan O’Donnell led the team in scoring with 23 points. Chase Almond and Zach Ward were the two others in double-digit scoring. They struggled from behind the three-point line shooting 20.7% on 29 attempts, only hitting six of their attempts. Along with that, they shot 33.3 percent from the field.

A key part of the Swish Kabobs win is the battle on the glass. They out rebounded them 48-27, with Barbosa and Cody Platt each getting 11 boards a piece. By winning the rebounding battle, they were able to get great second chance opportunities. However, they were outshot by the Skyhookers from three only canning 17.6 percent. They shot a little better from the field with 36.5 percent.