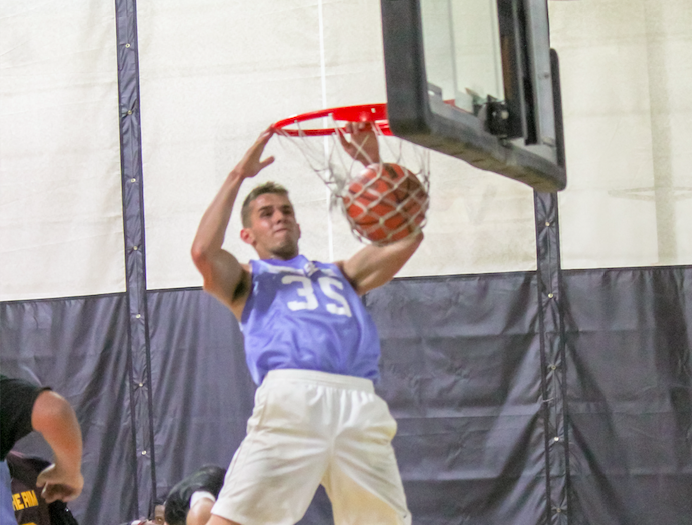 Two of the four winless teams in the league went at it Monday night in hopes of getting their first win. Now, there are only two remaining winless teams after Dinner Served defeated Above the Rim, 76-65.

The story of the game was the low scoring and  defensive game battle played by both teams. Dinner Served held Above the Rim to 33 percent shooting from the field, along with only 16 percent from behind the three-point line.

Matt Terrasi, who had a game-high of 24 points, led his team to their first victory of the season while his teammate Tommy Sweeney tacked on 19 points and grabbed 11 boards. Kyle Coniglio also contributed with his own 14 points and a few posters slams to hang up on his wall.

“Keep up the good ball movement, get some boards, and hit some shots,” Sweeney said.

Dinner’s Served did exactly that, as everyone on the team recorded at least one assist. With their full team in attendance this time around, they were able to rest players and utilize their entire roster.

Above the Rim didn’t let this one get away easily though. Eric Windley dropped 23 points, shot 55 percent from the field, and totaled 12 rebounds to record his first double-double of the season. Allen Valentine also had 14 points and showed that he can pass the ball well with his own highlight plays during the game.

However, this wasn’t enough to secure their first Legacy Leagues win.

Dinner’s Served can finally take a deep breath and relax a little after getting one in the win column. With a little momentum and their full team back, they can hope that Monday night’s victory is the start of a winning streak.