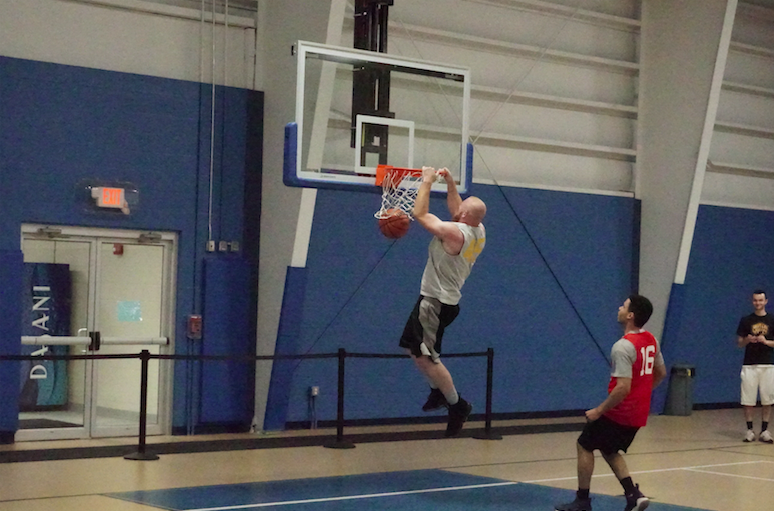 After starting the season with a loss, the Bucket Chasers earned their first ever Legacy Leagues win by beating the Wild Hogs 60-54 on Tuesday night in Johnston, Rhode Island.

While Wild Hogs guard Mike Bandieri was the highest-scoring player in the game with 33 points, it was Bucket Chasers guard Sergio Dalomba that ultimately led his team to victory with 20 points and 5 assists.

“It feels good to finally get one in the books,” Dalomba said. “We’re still getting adjusted to the rims, but [the Wild Hogs] are a pretty solid team. They played well, they played hard all night.”

The Wild Hogs came out of the gates strong with early 13-10 lead. After back-to-back defensive stops and offensive success, the Bucket Chasers went on a 12-2 run to bring the score in favor of their team, 22-15. As a result of their stellar play in the first half, the Bucket Chasers took a 35-28 lead into the half.

It seemed as though both teams were getting more comfortable with the lowered rims, as there were plenty of dunks going around on both sides early in the second half. The Bucket Chasers took a 38-32 lead off of a fast-break dunk from Christopher Truslow, but Bandieri and his Wild Hogs wouldn’t back down. They would go on to cut the lead down to 40-37 with an electric and-one dunk in which Bandieri faked a three-pointer and finished with a one-handed slam.

After the Bucket Chasers found a a few more buckets of their own, Bandieri once again cut the lead following a clutch three pointer. The Bucket Chasers would come back as Henrique Goncalves forced a defensive steal before going behind the back and finishing with a heavy two-handed dunk to give his team a 52-46 lead.

“I feel like [Goncalves] was playing really locked up defense,” Dalomba added. “He can run a lot, so his stamina is good. He’s able to play late and still dunk on people, apparently.”

Bandieri kept his Wild Hogs alive with a late three pointer to cut the lead to 60-54, but it was not enough to bring the score any closer than that. The game would end shortly after that shot in favor of the Bucket Chasers.

While the Wild Hogs look for their first win of the season in next week’s game against the Swish Kabobs, the Bucket Chasers look to build a winning streak when they take on Boom-Shakalaka.

“I think we’re going to try to set up a few plays (for next week’s game), Dalomba said. “I think we’re a little too still on the offensive side. We have to continue to move around, pass the ball around and set screens.”