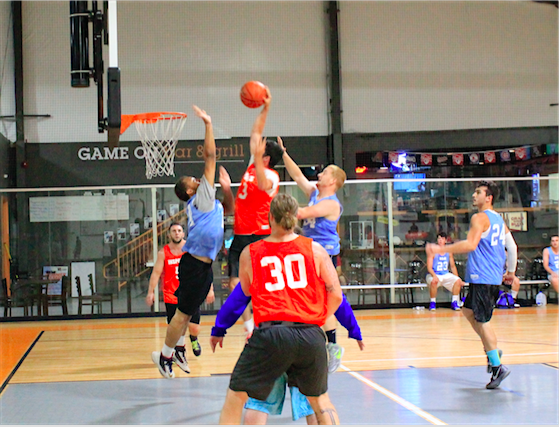 Sportslook’s four-game winning streak to start the season finally came to an end Tuesday night against Blood, Sweat and Beers, 67-51, after being outscored by 15 in the final period.

Blood, Sweat & Beers entered Week 5 with a chip on their shoulder, still feeling disrespected despite a 3-1 start to the season. Although their three wins came against teams with a combined 1-11 record, BS&B believed they were still a team to beat.

“We knew coming in we had a good chance against [Sportslook],” John Lutters of BS&B said. “We feel like we’re right under the top teams, but we’re always going to compete.”

Last week Sportslook was without star player Andrew Cavanagh, and were forced to play with no substitutes. It took a gutsy debut performance from Bryan Acevedo to edge Sportslook past ZewCrew to remain unbeaten.

Sportslook was without Cavanagh once again Tuesday night, and this time Acevedo wasn’t nearly as dominant, resulting in the team’s first loss. Acevedo finished with 25 points on 30 percent shooting, including only 3-of-12 from beyond the 3-point line.

BS&B outscored Sportslook 42-20 in the first and fourth quarters, including a 20-5 fourth quarter; this ability to play strong both out of the gates and down the stretch was too tough to overcome. Cody Dileonardo led the way with with 17 points on 8-of-12 shooting, while John Brolet contributed 15 points and 11 rebounds.

After Sportslook was down by seven points at the half, they outscored BS&B 17-11 in the third quarter to cut the lead to one. A Bryan Acevedo 3-pointer gave Sportslook a 2-point lead early in the fourth quarter, but it was all BS&B from that point forward, who would eventually take down Sportslook by 16.

BS&B will look to move to 5-1 next week against the struggling Pandas (2-3), while Sportlook will attempt to regain their footing against still-winless And-1.