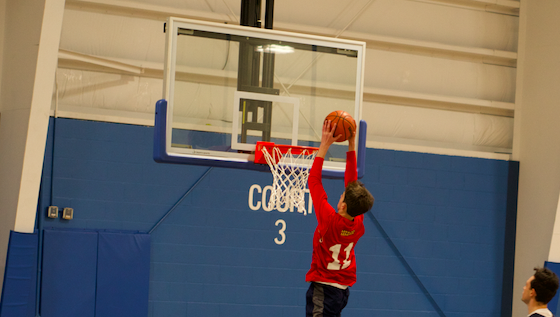 Not only was it the Dujes Boys first win tonight but they also won by a large margin of 34 points defeating the Pizza Rolls, 68-34.

The Dujes Boys came into tonights game with an 0-3 record but their players showed up tonight, four of them scoring in the double digits. These four had great games tonight but the two players that really stuck out were Aaron Avant, who had a team high with 24 points, and John Couto with 13 points. The pair lead their team perfectly and brought the energy and passion needed to help give them the victory.

Not only was their offense stellar, but their defense held up to high standards notching ten steals and crashing the defensive glass with a total of 25 rebounds.

The Pizza Rolls didn’t perform to their peak but Benjamin Floyd showed up having a team high of 12 points, but that wasn’t enough to help reel in the win.

The Pizza Rolls are now 0-4 and have a lot of work ahead of them this season, however there is still enough real estate left in the season to make some noise.

The Dujes Boys looked different physically and mentally as Aaron Avant said when asked what they took away from the win. “We have been practicing, and building a lot of chemistry over the week and we must continue this in order to win more games this season.”

He was also asked how what the team did differently Wednesday nigh that made them look different from the other games. “[It was] communication! It’s key. Also the fact that we were passing the ball a lot better and the ball movement was great tonight.”

If the Dujes Boys continue to play like this for the the rest of the season they can really be a hard team to stop come playoff time.