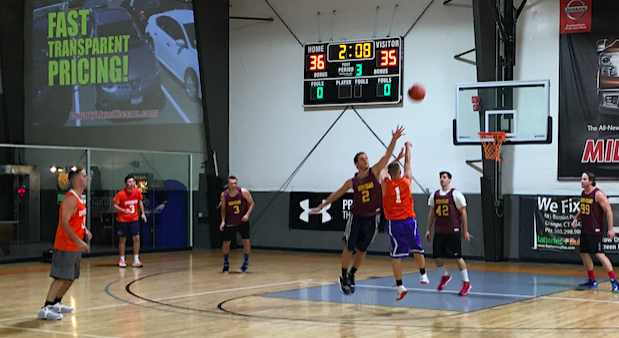 This week’s previews are presented by: SuperClean

BS&B upset a short-handed Cereal Killers team last week to improve to 4-0 on the season. This game will prove if that victory was a fluke or not. After an ejection, Sportslook was down to four men in their heartbreaking loss to Goon Squad last week, their first of the season.

The Kekambas beat Run TMC handily last week, 71-54, but they run into one of their biggest tests in week five. The Temptations coasted to an easy victory over the Air Ballers, despite the absence of point guard Nick Santorelli.  With him back, they look to continue their winning ways against the Kekambas.

No Limit is quickly ascending toward the top of the league, after they thrashed the Titans last week, 68-45. The three-headed monster of Tarell Vargas, John Rullan, and Howie Miller determine this team’s destiny. They have made nine more threes any other team. The preseason favorite of the rookie teams was the Cereal Killers, but they are off to a rocky start, now having dropped their last two games including last week’s overtime thriller to BS&B.

The Titans showed promise with the first joint start of the Echols’ brothers – they are better than their record indicates. Goon Squad is a tenacious defensive team lead by Matt Marconi, who has been steadily ascending the power rankings.

One of these teams will capture their first win of the season. Run TMC’s preseason rankings did not indicate they would struggle to find their first victory, but here we are in week 5 and they are still winless. One Time is still searching for the replacement of Eric Rankin in the scoring department, and will need someone else to step up to earn their first victory.

The Brotherhood were in full-gear last week as Player of the Week Russ Payton set a Legacy Leagues record with 60 points on 28-0f-33 shooting from the field. With the expected return of last year’s MVP Michael Davis, the only question in this matchup is the final margin of victory. Jaylon Smalls continues to be the lone bright spot for the Air Ballers, as they look to capture their elusive first victory.