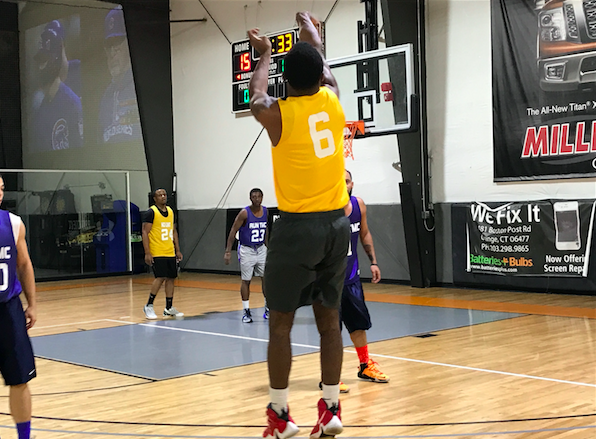 This week’s Previews are brought to you by: SuperClean

The second episode of the “Weekly Rebound” Legacy Leagues Podcast: Sam Leventhal and Joe Catapano are back, this time joined by The Legacy Leagues commissioner and CEO, Joey Zocco. Check out where your team stands as we inch closer to the playoffs.

Sportslook is coming off a hard fought loss against The Brotherhood last week, and will face a Temptations team who just beat up a sliding BS&B squad. Scott Corchard has been the backbone of a Sportslook squad that will need Bryan Acevedo to shoot well if they want to topple a tough Temptations team that sports a top scorer in Carmine Santorelli, and a glass-cleaning front court that will limit second-shot chances.

Both of these teams come in at 2-5, but each are riding different streaks into this game. The Kekambas lost their third straight after dropping a tough one to a struggling Cereal Killers squad last week. Titans are loving their 2-5 record after winning their last two games as Jack Champagne and Greg Horne are in the top 5 in three-point percentage, making them a sneakily lethal team. The Kekambas Davin Sirpenski and Chris Aaron have given their team an offensive bump since joining the Kekambas in week 3.

This matchup pits the leagues top 2 teams and we will see if Player of the Week Matt Marconi and Goon Squad can finally hand The Brotherhood its first-ever loss. Goon Squad demolished a winless One Time team last week, but will face much tougher competition in Michael Davis and the Brotherhood’s lockdown defense. The Brotherhood handled a very good Sportslook team last week and look to extend their undefeated streak.

BS&B continues to slide after a tough loss to Temptations last week, where we saw them play better in spots, but ultimately suffered because of too many turnovers. One Time has been suffering all season, but may have hope in finding a win before the playoffs behind Mike Cody’s playmaking. There’s some hope of One Time finding a win if they can force BS&B to make mistakes and turn the ball over, leading to easy baskets for One Time.

Will: Blood, Sweat and Beers

Both of these teams are coming off much needed wins last week, as Run TMC upset No Limit and Cereal Killers squeezed out a tough win over The Kekambas. Run TMC’s fast play and good shooting seems like a disaster waiting to happen for the Cereal Killers, who have been exploited by faster offenses. Both teams will be ready for this one as Will Hudson gets set to face off against his former team.

No Limit found its self on the losing side for the first time since Week One, and will look to rebound against one of the worst squads in the league, the Air Ballers. The Air Ballers have one bright spot with Jaylon Smalls, but this will probably do little to slow the No Limit offensive onslaught that we expect to return to form. Can Air Ballers limit the stellar No Limit three-point shooting to keep the game close?