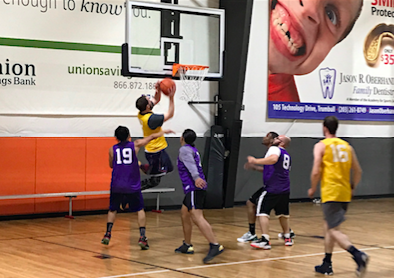 This week’s Previews are brought to you by: East Coast Garage Door

The Brotherhood’s playoff position is set in stone regardless of how this game turns out. That said, I don’t expect the Brotherhood to roll over and let their perfect record be tainted. With a loss and a Run TMC win in week 9, BS&B would see themselves drop to the seven spot in the standings. With Russ Payton sitting out week nine, BS&B will have to capitalize on the MVP candidate’s absence.

This matchup doesn’t look as though it will provide much drama. Sportslook has been cruising and the Air Ballers still find themselves at the bottom of the standings. Currently tied for the worst record and losing the point-differential match up, short of something magical it looks as though the Air Ballers will head into the playoffs as the 12 seed. With a cluttered top of the standings, Sportslook must win if they want a first round bye in the playoffs.

Since Reggie Stewart joined Run TMC four weeks ago, his team went from 0-4 without him to 4-0 with him. Stewart’s impact is obvious, but should not overshadow how much improved the entirety of this team is. Riding a lot of momentum, Run TMC has an opportunity to jump past BS&B in the rankings with a win and a BS&B loss. The Titans find themselves on a three-game win streak themselves. This game should prove to be an exciting matchup of two surging teams.

This game looks to be our most promising matchup of week nine. The Temptations find themselves currently at the fifth spot on the standings, just narrowly missing a bye in the playoffs. Given the other matchups this week, it looks like whoever wins this game will get the final bye. With the playoff implications so high look for this to be a hard-nosed matchup featuring two of the league’s elite scorers.

The Cereal Killers fell short to Run TMC last week, despite a first half lead. The Cereal Killers have played incredibly inconsistent basketball as of late, but are looking to finish the regular season on a high note with a favorable matchup against One Time. Aside from Mike Cody, One Time has struggled to find scoring options and it has resulted in a winless season. While it won’t be easy, this is a game that One Time could potentially win with an above average team performance.

These two teams have quite the romance when it comes to Twitter. I don’t expect that once these two teams are face to face on the court that same love will be visible. No Limit is in a bunch at the top of the standings hoping for a first round bye. With a victory No Limit would be locked into one of the top four spots. The Kekambas have shown sparks of stellar play, but have been plagued by inconsistency. The Kekambas will have to channel their best basketball if they wish to come out on top.