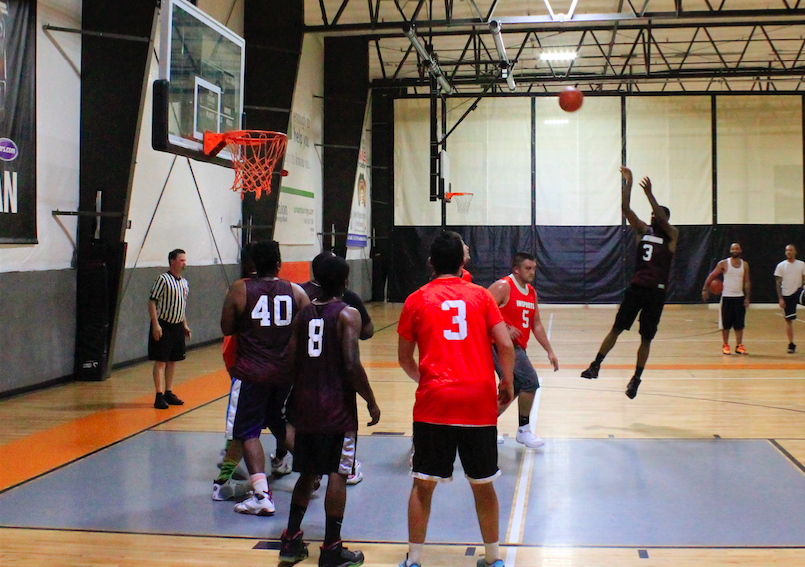 With the inaugural season in the books, and The Brotherhood with a title under their belt, it’s only right to welcome them back with open arms. Although their squad is very similar to last seasons, there are a few crucial changes that were made to this roster.

They have added a couple new faces to the Legacy Leagues in Tim Adanti and Rashaun Reid, but in turn, have lost high scorer Tyrhon Coward. Coward, who captained an All-Star team last season, was ranked second in regular season points and played a pivotal role in The Brotherhood’s success.

However, one player does not define a team and with most of The Brotherhood’s core players returning, I am looking to see them make another championship run behind last season’s Most Valuable Player and Defensive Player of the Year, Michael Davis.

After falling just short in the summer season, Sportslook is back at it again with a very familiar roster. If anyone wants to compete with these guys, they’ll have to stop the two-headed monster that is made-up of Andrew Cavanagh and Bryan Acevedo. Last season, Cavanagh and Acevedo led the way for this team in the scoring chart with highs of 44 and 51 respectively, but fell just short in the finals.

The trouble doesn’t just stop there with these guys. The role players on this squad, in Johnny O’Brien, Nick Bacarella and Colin Markus, have transformed into stars themselves. O’Brien really came alive come playoff time last season, and proved just how lethal he could be on the boards. Bacarella was able to round off his game to that of a true point guard. Markus capitalized on the solid season he had in the playoffs. Whenever someone was absent, he would step-up and easily fill their shoes.

There are a couple of new guys joining the team this season, and even though we don’t know these players yet, everyone that seems to touch a Sportslook jersey turns into a threat.

Ladies and Gentlemen, after a short hiatus from Legacy Leagues, we now get to see the return of Carmine Santorelli. Last season, Carmine was noted for performing well above any standards for turning Wake & Blake from slackers to sleepers.

Now, if you thought that one Santorelli was a problem, try dealing with two. That’s right, Carmine’s twin brother Nick will be joining him on their new squad, The Temptations. Although we don’t know too much about the rest of the team, we can be sure that any team with Carmine is a threat.

To The Brotherhood: watch out, they’re coming for the throne.

The commissioner’s squad has returned. After looking like a promising team at the beginning of last season, Run TMC looked as if they hit a brick wall beginning in week four, despite Will Hudson leading the league in points and total rebounds, and Matt Zocco in assists.

Unfortunately for Run TMC, Hudson will not be rejoining the team. Instead, he’s replaced by ZewCrew standout Ty Alston. Alston was easily seen as ZewCrew’s most reliable source last season ranking highly in rebounding and assists.

In addition to the Zocco brothers, Shaq Holman, Brian Blake and Nic Civale will also be making their returns. Holman proved to be bright in the beginning Summer 2016 but he fell off as the season carried out. Hopefully his freshman gitters don’t turn into a sophomore slump.

Following Run TMC’s disappointing playoff run in season one, both Kyle Murphy and Rob Koripsky have decided to part ways with the boys in blue. Instead, they will be uniting forces with their younger siblings, Keith Murphy and Steve Koripsky, to form One Time.

If you thought that weren’t enough three pointers to go around, they are also being joined by And-1’s Jake Miko, who led the league in three-point attempts, and The Land’s Mike Cody.

The Cereal Killers seem as if they are ready to make a name for themselves this season. They have formed a roster that looks to be able to compete with The Brotherhood. This squad, formed by former Brotherhood star Coward, contains the likes of Summer 2016 scoring champion Will Hudson and Adam Samuel. Hudson was a star last season making the All-Star team and Legacy Leagues All-First team. Samuel has played in the league before the league moved to Insports, and he showed us just how lethal he could be.

As for the rest of the team, they have yet to be exposed to the talents of Legacy Leagues but if we know Coward, none of his teammates are going to be slouches.

It wouldn’t be a season without the return of the surprise squad. Coming into the inaugural season, no one had a clue who any of these players were. They had said they were just a group of friends who played a lot of driveway basketball together, but they turned out to be more than that. They turned out to be a dominant force in Legacy Leagues, and they’re back again for another season.

In the summer, they finished second in the standings behind The Brotherhood and now they’re coming back with a chip on their shoulder and a couple of changes in the additions of Luigi Garofano and Andrew Martino.

Rounding out the rest of the rosters is: Goon Squad, The Kekambas, Titans, No Limit and Air Ballers. These four teams we know   basically nothing about, but we do know that it is going to be a tough road to the top of the standings. These squads will have to get on a roll out of the gates in order to secure themselves a top spot.

There are many solid teams in this league, but your one mission to prove yourselves is to take down The Brotherhood. This is no easy task for any team that has the pleasure of gracing the courts of Insports. The way your team plays the game of basketball will need to be near perfect. These new teams will need to be able to be a huge presence on the boards, run the floor, stop teams in transition and hold on to the ball. However, it might be a little difficult for that last task with Davis standing in your way.