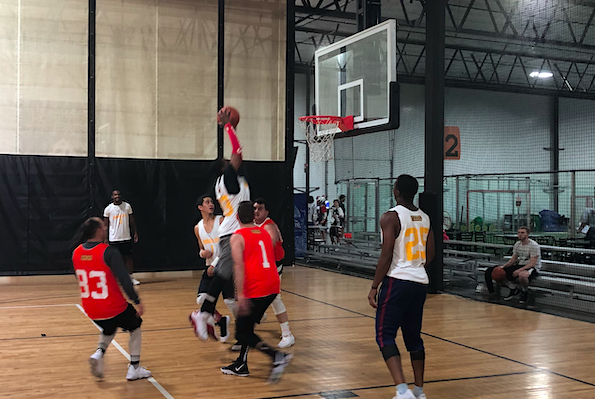 Sharpshooting was a theme in this battle with Shocker City making 20 three-pointers as a team. Shocker City also used their superior speed to catch up to their opponents on multiple breakaways and provide some clutch steals and blocks. Their overall explosiveness and athleticism is what propelled them to their championship last season, and many analysts believe that they are the front-runners for the title again this year.

They were lead by one of the top players in the league in Davon Pratt, who tallied 25 points for the game and shooting 75 percent from 3-point range. Perennial All-star Michael Davis was also a key factor in the convincing victory with 21 points of his own.

Sportslook did not go away in this one keeping the score within five points in the second quarter and actually outscored Shocker City in the fourth quarter, 25-24. Jeff Norko lead Sportslook with 31 points and seven rebounds in the loss.

“That’s why we put this team together, for this blowout wins,” Shocker City’s Chris Rudzinski said. “We’re just going to take it week by week, but we’re going to win the Championship.”

Shocker City will face the Young Kings next week, while Sportsbook will look get the first win of their 2019 Winter season when they face off against a forceful Run TMC squad.