Finals Preview: No. 1 Brotherhood vs No. 2 No Limit 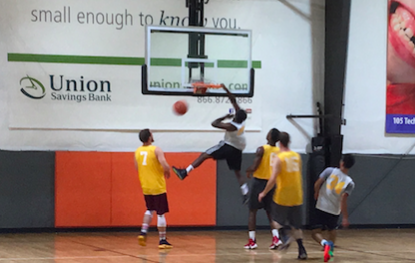 After a season fraught with parity, the Legacy League’s two best teams have navigated their way through the bracket to find themselves head-to-head, both with aspirations of hoisting the NAPA Auto Parts Championship Trophy.

When these teams met back in the first week of the Fall season, the Brotherhood were reigning champs, and No Limit was a run-and-gun rookie team loaded with athleticism. This was the first time we saw No Limit’s ‘core-four’ — who scored all but two baskets for their team on their way to 80 points.

This was no small feat against the tenacious Brotherhood pressure, who have forced 41 more turnovers than the next highest team this season. For the Brotherhood, Russ Payton and Derrick Davis were the only double-digit scorers, but connected on 21-of-32 field goal attempts.

They say defense wins championship and No Limit is no slouch. They have blocked 20 more shots than any other team, but curiously only ranks 11th out of 12 teams in steals, grabbing 75 less than the Brotherhood, a rate of almost 7 steals less per game. The thought of the number one team in steals going against the top shot-blocking team should produce some fireworks in transition.

All season, No Limit defended on the scoring prowess of the “Big-Three:” Tarell Vargas, Howie Miller, and John Rullan. Other names for these players are the Burns Tire Most Valuable Player, SuperClean Dunk Champion, and East Coast Garage Door 3-Point Champion.

The Brotherhood’s Michael Davis has a thing for round numbers, pouring in 30-points in their Semifinal route of Goon Squad, and another 50 points in the All-Star Game, collecting the Sportslook Passing League All-Star Game MVP honors.

Despite the mass of hardware that the “Big-Three” took home, Ronte Byrd has been the unsung hero for No Limit in the playoffs.  In their Quarterfinals matchup against the Kekambas, Byrd hit a game-sealing three-pointer in the final seconds to catapult them into the Semifinals. In the Final 4 against Run TMC, in which they trailed by five at halftime, Byrd hit two clutch threes in the third to ignite the No Limit comeback.

The biggest difference from these two team’s week one matchup, besides both teams now playing their best basketball, is the return of last season’s MVP Mike Davis, who missed the first couple games this season for the Brotherhood. Davis’ presence this time around will create a ton of problems that No Limit will have to combat if they want to hand the Brotherhood their first ever loss in the Legacy Leagues.

The Fall 2016 season began with No Limit dueling The Brotherhood to their smallest margin of victory to that date, and now ends with these two teams playing for the right to hoist the Napa Auto Parts Championship Trophy. Which team will finish this storybook season the way they hoped when the season began back in September?